Georgetown, Guyana – (November 25, 2017) President David Granger, last evening, commissioned two new ‘David G’ school buses under the ‘Boats, Buses, Bicycles plus Books and Breakfast’ (Five B’s) Programme, which will serve the Demerara-Mahaica (Region Four) even as he noted that investments in education coupled with development and emphasis on the agricultural sector will play a leading role in the transformation of the region and the country. 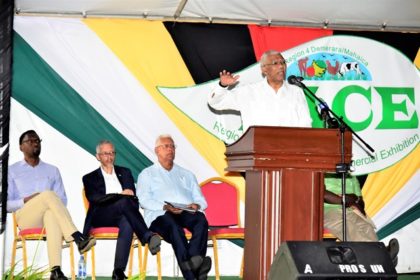 President David Granger addresses the audience at the opening of the RACE.

The President, who was at the time speaking at the opening of the three-day Regional Agricultural and Commercial Exhibition (RACE) at the Lusignan Community Centre ground, said that the buses will serve the school children of the East Coast and East Banks of Demerara and is part of the Government’s continuous effort to ensure that there is access to education for all the children of Guyana. The RACE initiative is the brainchild of President David Granger, who believes that Guyana can play an important role in food security particularly in the Caribbean region. The President said that more innovative approaches, through education, must be taken to enhance and highlight Guyana’s agricultural potential and this is where investment in education and technology transfer is important.

President Granger noted that Demerara-Mahaica, as Guyana’s strongest administrative region, is expected to play a pivotal role in driving this ‘green’ agenda. “We must share and the more developed regions must assist the least developed regions. As you have heard before, Demerara Mahaica is the most developed, smallest in size but strongest economy and at the same time, much of the economic potential and infrastructure are all located in Region Four…Demerara-Mahaica is the bellwether – it knows the way, it shows the way, it goes the way. The Region’s development, in this regard, must be aligned with Guyana green trajectory of development which has, at one of its central objectives, the reduction in economic disparities between the hinterland and the coastland,” he said. 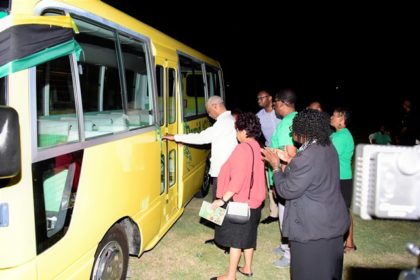 President Granger cuts the ribbon to officially commission one of the ‘David G’ buses.

He noted that the event is geared towards showcasing and promoting local businesses, particularly those, which are involved in agro-processing. It is also expected to connect producers and consumers while improving and expanding trade opportunities within the region. President Granger said that the initiative will also help to empower young and upcoming entrepreneurs, something his Government is passionate about. The Head of State said that it is his hope that RACEs can help to highlight the people’s potential to produce and to expose their products for purchase at home and abroad and provide markets for farmers, traders and manufacturers.

“This is important because the exhibition is about people not Government. When we speak about RACE, we speak about collaboration with the central government and the local authorities. We want to ensure that the farmers and fisher folks and manufacturers can benefit from these exhibitions. We want to ensure that the traders can benefit. I have seen women, widows, housewives producing condiments coming out to the villages to put their goods on display. I have seen micros and small enterprises coming to being because individuals see the potential not just to make profit but to contribute to the regional wealth and this has started to happen quietly in the regional, and this is the realisation that we have produced especially in the wake of the Local Government Elections last year,” he said.

More importantly, however, the President said that exhibitions such as these also emphasise the importance of regionals stakeholders not only the Regional Democratic Councils (RDCs) and the Neighbourhood Democratic Councils (NDCs) but greater participation by the private sector. To this end, the President proposed that the Region develops a Regional Economic Action Plan (REAP) to ensure that its agricultural potential is transformed into reality.

“Let us show the world and the country that Demerara-Mahaica is united and willing to demonstrate the full extent of its economic potential. We cannot go through this five-year cycle and year to year without having a plan so let us see a Regional Economic Action Plan, which caters for the overall development of all the municipalities and neighbourhoods in this region as well as augment production. Demerara-Mahaica has a lot of experience in education, energy, economic services, enterprise development and environmental protection and you have a lot to teach this country. I wish this region can go to other regions and implant that expertise. What is good for Region Four is good for Guyana and what is good for Guyana is good for the Caribbean region,” he said.

Meanwhile, Minister of Agriculture, Mr. Noel Holder, in his remarks said that agriculture is one of the pillars earmarked to forge the path for sustainable development for the Caribbean and Guyana. He noted that not only is it of fundamental significance to ensure food and nutrition security, but it also represents a viable pillar on which to promote economic development for the country and provide a means for citizens to generate wealth and ensure a sustainable developmental trajectory. 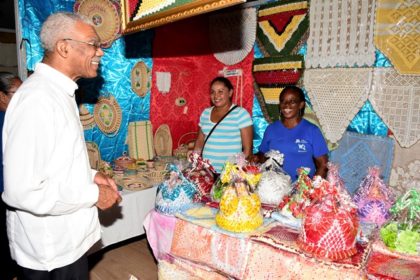 President Granger shares a light moment with these exhibitors at the Lusignan Ground as the Region Four Regional Agricultural and Commercial Exhibition.

The RACE initiative, therefore, remains important and timely and the significant contributions of agriculture as a major component of the country’s economy is likely to persist even though accelerated growth has been foreseen for the mining, oil and gas, services and manufacturing industries. The Ministry of Agriculture recognising this has been playing its part by providing the necessary resources and support to the relevant stakeholders, he said.

“Currently there are projects to improve the livelihood of farmers in this very region such as the Rural Agricultural Instructor Development Project. The implementation of this US $12.5 million project, will pave the way for farmers to once again return to the land to improve management, infrastructure, agricultural technology, access to fed aid by small farmers, diversification, and rehabilitating and maintaining of drainage and irrigation systems and farm to market to name a few. The Ministry of Agriculture stands ready to stimulate economic activities in all regions,” he said.

Minister of Business, Mr. Dominic Gaskin, said that according to statistics provided by the Ministry of Agriculture, US$261 million is spent annually on food imports. Noting that that is a huge sum of money compared to the size of the country with vast land and water resources, Minister Gaskin said that Guyanese must do better in supporting the agricultural sector. “We have good, fresh wholesome food right here in Guyana. We need to find a way to produce more of the food that we eat, especially the processed food because a lot of the food we import are processed and that processing can be done right here in Guyana. So these Expos allow smaller producers to get access to hundreds of consumers and to promote and sell their products. As a country we need to ensure our own food security otherwise we could find ourselves with an even bigger food importation bill than the two hundred and something million. The food that is produced locally is also likely to be healthier than the imported food, we therefore can get additional benefits both economic and health benefit by feeding ourselves,” he said. 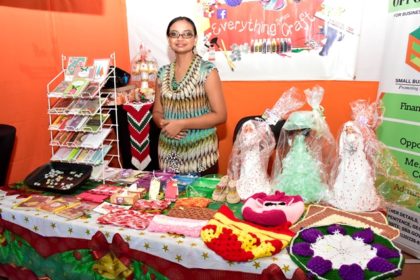 This exhibitor from “Everything makes Craft’ proudly displays her products at the Exhibition.

Chairperson of the Region, Ms. Genevieve Allen said that the event will become an annual one for the Region. She noted that the Demerara-Mahaica must achieve its full agricultural potential and the regional administration will work to ensure that this is realised.

Meanwhile, one of the exhibitors, Mr. Clarence Hanes, in an invited comment, said that the Exhibition presents a great opportunity for small scale businesses to showcase their products and promote their business. “I think this opportunity that the Government is giving us is very good exposure and we appreciate it. Many people just see the products and do not know where it comes from and so this will give consumers the opportunity to hear from us and see what goes into the process,” he said.