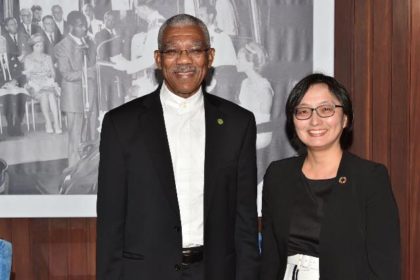 During the meeting, several areas of mutual interest, including the President’s push for a ‘green economy’ and Guyana’s thrust for the achievement of the United Nations Sustainable Development Goals, were discussed.

Ms. Tanaka, in an invited comment, described the meeting as “very useful” and informative.

“The President shared with me the aspirations and his vision for this country and we discussed how the UN system can support the Government and country in achieving those developmental objectives. In that, he emphasised the green agenda, the ‘green economy’, sustainable development for this country and this matches very well… the sustainable development goals that the UN General Assembly adopted last year. So I very much look forward to working with all of the UN agencies serving in Guyana to really move forward the SDGs for a better life for everybody, no one being left behind,” the UNDP Representative said.

Ms. Tanaka also pledged to continue to build on the relationship, which has existed between the country and the United Nations over the years.

“I very much want to build on the good work, which was done by Khadija [Musa] and the country team and the UN agencies, which are here and I am trying to catch up as fast as I can. It is very important to strengthen and improve the partnerships that we have as the UN system with the governments, the national institutions, civil society and the communities and I will do what I can. I am excited about working in Guyana,” she said.