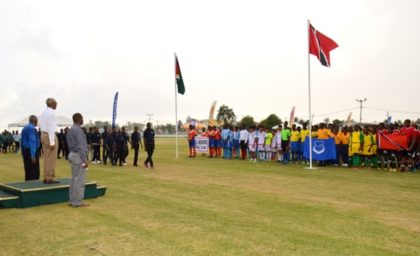 President David Granger takes the salute from one of the team,s which participated in the march past this morning

During the declaration, the President expressed his appreciation for this initiative, which he says, is an example of true regional integration and regionalism and which brings young talent from grassroots communities into focus.

The President said that the event presents not only a wonderful opportunity to youths, especially to those who are in need of activities to occupy their leisure time, but it also helps to build camaraderie, self- esteem and a positive outlook for the youths involved.

“I commend the Foundation for [strengthening regional integration] through its social work activism in grassroot communities. The Foundation is fostering the spirit of social solidarity among the region’s young people. It is promoting regionalism from the bottom up, it is working at community levels to build greater self-esteem and self-worth, particularly among the youth and that is why we are all here this morning. This tournament has become a bridge among the three states,” the President said.

Over 500 children from Trinidad, Barbados and Guyana are partaking in the tournament, with participants from as far as Parishara Village, Upper Takutu- Upper Essequibo (Region Nine).

Chairman of the Foundation, Mr. Hamilton Lashley, said that the organisation is delighted to be hosting the tournament in Guyana, even as the country is in its golden jubilee year of Independence. He noted that Guyanese and even Caribbean nationals can expect more coming out of the organisation in the days to come.

President David Granger shares a light moment with Chairman of the Hamilton Lashley Human Development Foundation, Mr. Hamilton Lashley, before the commencement of the event this morning.

“We are delighted to be here in Guyana. We are thankful for the hospitality. This tri nation relationship that we have developed certainly will continue,” he said.

President of the Guyana Football Federation, Mr. Wayne Forde, said that the organisation welcomes the initiative since it is in keeping with its goals.

“We at the Guyana Football Federation and the Executive Committee believe that this is the perfect opportunity to further our youth development programme. As you may have seen over the past couple of months, there have been tremendous emphasis on youth development football,” he said.