Ms. Henderson, who has been based in Barbados, will return to New Zealand next month when her tour of duty comes to an end. During the brief meeting, at which Minister of Foreign Affairs Mr. Carl Greenidge, who is also performing the functions of Prime Minister, was also present, the Head of State said that Guyana is pleased with the level of cooperation between the two countries during the Ambassador’s tenure.

“Your tenure wasn’t noisy but it was effective and as you return to your country, we hope that you will be better positioned to do more, particularly for the Small Island States,” he said.

Ms. Henderson described her tour of duty as successful noting that she is pleased that she has accomplished most of what she had set out to do when she took up the role. 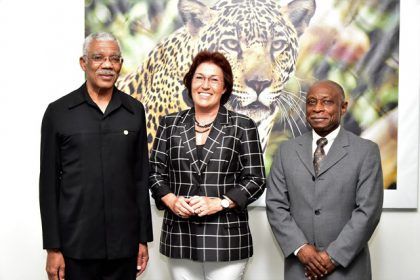