President David Granger, today, met with senior officials of the various agencies that are responsible for the protection and management of the environment. During the meeting, the President requested that the group prepare a document, which details the priority areas, opportunities and other relevant information regarding Guyana’s biodiversity. He explained that this information will be used to inform his bilateral talks with heads of states on the side-lines of the 71st Regular Session of the United Nations (UN) General Assembly in New York next month. 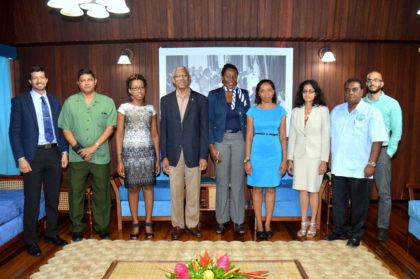 Noting that he will be seeking to advance his administration’s green agenda, during bilateral talks, the President said that, “this is a country we love. It has tremendous wealth and we can share that wealth for generations to come… We have poverty around us and we need to make our wealth work for us.”

He informed that the Government will be establishing a department of environment to better coordinate the work of the different agencies that deal with the environment and help to address some of the challenges. The Head of State explained that as it stands, there are problems with deforestation, a decline in and smuggling of wildlife species and little to no mention of biodiversity, zoology and botany in schools’ curriculum.

The President also spoke of the vast potential of the Guiana Shield and said that Guyana cannot wait for other counties within the Shield to act. It must move ahead with its own plans and demonstrate leadership with the furtherance of its green agenda.

“Our responsibilities are massive to this and future generations of Guyanese… Guyana is poised to play a dominant role in making the Guiana Shield central,” President Granger said.

He also spoke of the need for children to be taught about the Guyana’s unique flora and fauna at an early age in order for them to develop a greater appreciation for the natural beauty that the country possesses. This he said, will help to attract more young people to the sciences, where they will develop viable careers and, at the same time, emerge as strong advocates for environmental protection.