During the meeting, the two discussed areas for collaboration within the sector.

Minister Mustapha told Ambassador Lynch that since taking office, there has been a renewed interest in the agriculture sector across the country. 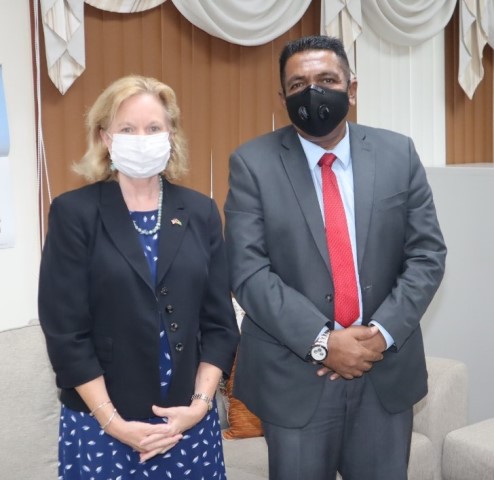 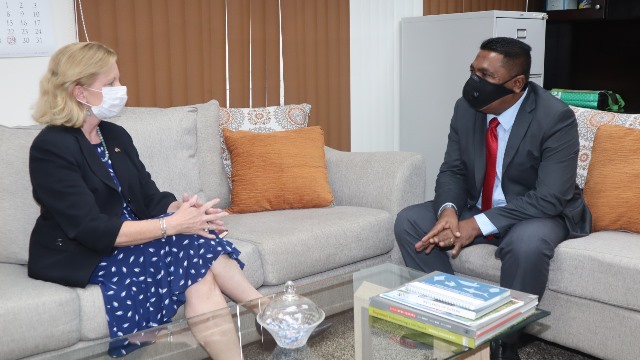 “With oil and gas coming on stream, there was a view that there would be a migration of labour to that sector and that agriculture would suffer. People are once again, becoming excited about agriculture, especially with the many outreaches to several farming communities and the quick results we are delivering to issues they have been experiencing for years. Even with some of the programmes that we have restarted, there’s a renewed hope that the agriculture sector can play an important role in Guyana’s economy. We’ve also reversed all the harsh measures implemented by the previous Government. With farmers having these incentives, they are being encouraged to return to the fields,” Minister Mustapha said.

The Minister also discussed Government’s plans for the livestock and other sectors.

“We are working with farmers to make better breeding animals available. We’ve also increased our extension services and extended our Black Giant poultry programme to other Regions. We are also looking to extend our artificial insemination services. In the other crops sector, we are now promoting smart agriculture. In this 2020 Emergency Budget, we’ve allocated $15.8 million to purchase shade house materials that will be sold to farmers at cost price. The funds from this initiative will be placed in a revolving fund so that materials will always be available. I’ve also restarted seed and Acoushi ant bait distribution programme in all the farming communities,” Minister Mustapha said.

Ambassador Lynch said that countries getting involved in the oil and gas sector must work to sustain and develop their other industries.

“It’s very important to maintain the diversity of the economy. Oil and gas is great, but it is somewhat temporary so it is important for Government to focus on these other sectors,” Ambassador Lynch said.

In responding to queries about the Ministry’s efforts to satisfy international standards, Minister Mustapha said that focus will be placed on improving the existing facilities as well as strengthening existing policies in that regard.

“We will be injecting a lot of resources to ensure our current packaging facilities satisfy international best practices and standards. I hope that your Government will be willing to guide us as we work to develop policies, especially in areas where we are lacking, so that we can have markets in the US for other products. We are also working closely with US officials to see how soon we can have the ban on catfish lifted,” Minister Mustapha said.

In addressing the current status of the ban on catfish imports to the US, Ambassador Lynch said the US Mission in Guyana is working with Guyanese authorities on a way forward as it relates to lifting the ban.

“We know that it is an area that is very important to all of you and we are looking into it. The Food and Drug Administration in Guyana has to produce a self-survey tool and we can’t do anything until that’s produced. In addition, there’s a pretty intense lobby in the US relating to catfish and protecting the US fishermen as well. In fact, next week we have a phone (conference) call with USDA, USTR and your folks here to go over some of the technical issues and some of the things that you will encounter going forward. A couple of years ago we drew the line on importing catfish and Guyana didn’t object to that. Back then, I know it was a different administration. We are doing our best and we will continue to work with your technical persons,” Ambassador Lynch said.

Areas for technological transfer and training to advance the sector were also discussed. Minister Mustapha said technology will play a big part in the way agriculture is done in Guyana going forward, however, technology will not replace human capital.

“We have to use technology but we cannot allow it to take over the workers’ roles. We are working to mechanise and modernise the sector, but at the same time, we have to take people into consideration. We cannot displace people or put them on the breadline. We have to ensure when we develop any of the industries in Guyana, we take into consideration how the people will be affected. This Government sees our human capital as one of our greatest resources. People are also buying into technological advances so there will be a balance in how Government integrates technology into the sectors that depend heavily on human capital,” Minister Mustapha said.

In addition to training and capacity building, Minister Mustapha also said that the Ministry hopes to collaborate with the US Government to develop programmes to assist community farming groups across the country.

“I would also like to work with you to develop programmes to assist community farming groups across the country with skills training, technological integration in their operations, as well as providing key farming equipment to these groups. We have a lot of small farming groups with potential to produce huge amounts of produce but they need assistance with infrastructure and other farming equipment and tools. While Government is committed to working with all of these groups, resources are limited and I would like to see a project being birthed so that we can assist these farmers,” Minister Mustapha said.