Agriculture Minister, Hon. Zulfikar Mustapha and a team of officials from the Ministry met farmers from Mocha, East Bank of Demerara, to listen to issues affecting the community.

The visit came as a follow-up to an engagement Minister Mustapha had with two farmers at his weekly Farmers’ Open Day. After listening to their issues, Minister Mustapha committed to visiting the community to get a first-hand look at some of the challenges there. 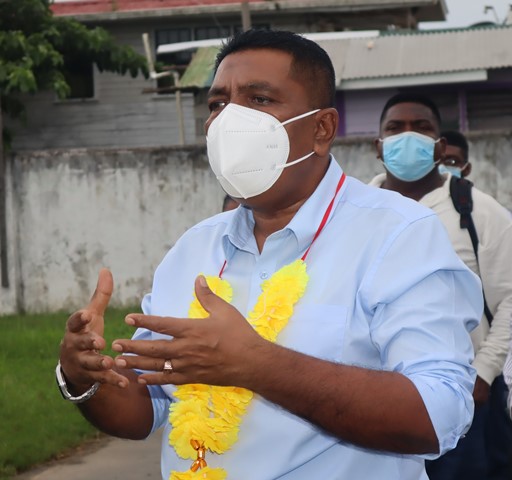 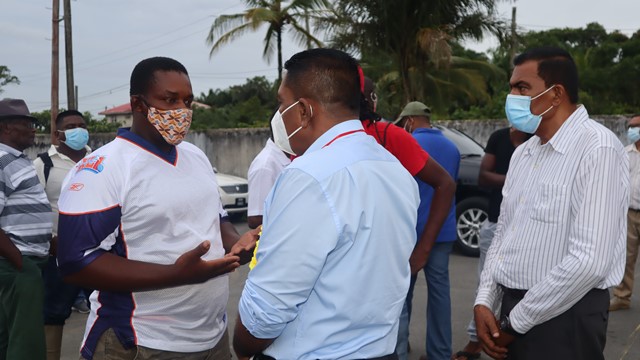 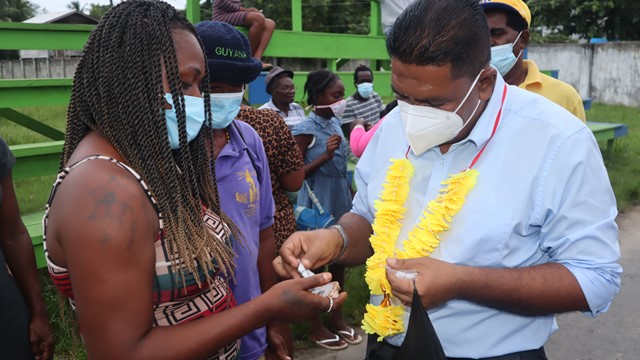 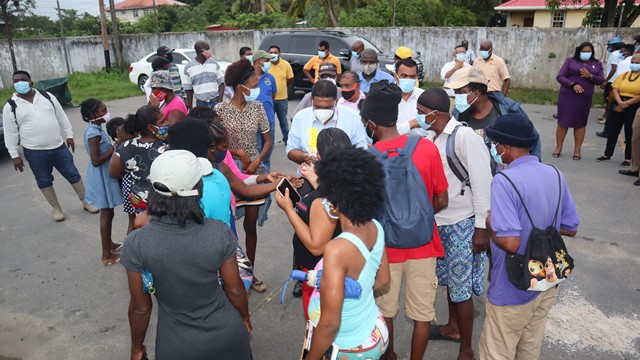 During the meeting, several farmers complained about the lack of proper drainage and irrigation.

Residents said that there is need for additional drainage pumps to be added to the drainage systems in the community.

Mr. Floyd Stewart, a 64-year-old resident of Mocha, said that even with the current koker (sluice), persons still experience some amount of flooding during the rainy periods.

“Some works were done in the area, but the area that the pump has to take this water from, the distance that it has to pull this water from is too large. When the koker is closed, it throws back water and some of the residents in the area are flooded. So, we are asking if we can get two or three more pumps added to this one in the area to act as a back-up to assist with draining the water in the area from Diamond to Peter’s Hall. I wish for your officers to come in here during any rainy season and see what farmers go through. Come before and after the rainy season. It is not that people don’t want to farm. Imagine poor people investing their hard-earned money and at the end of the day, when all your crops are damaged nobody has anything to give you,” Mr. Stewart said.

Mr. Lorick De Mattos, a cattle farmer, said he needs assistance with accessing his lands to graze his cattle.

“My issue is with impounding. I have some lands for my cows, but I cannot access the lands and as a result my animals are taken to the pound regularly. I spoke to Mr. Flatts and they came and did some work and they did their best. The problem is that the outfall at Little Diamond, the company that got the contract to construct, what I think is a two-door koker; the contractor said that it would’ve been completed by November but it wasn’t. I’m asking that whenever that project is completed, that the structure be backed-up with a pump because it is a lot of water coming onto the lands,” Mr. De Mattos said.

The cattle farmer added that the situation is forcing him to sell his animals because he cannot access his lands and his alternative grazing systems is costing him more than he can afford.

“I was living overseas and I came back because I believe in agriculture. I feel this is where I belong and if I can’t make it here, it’s like I can’t make it anywhere,” he added.

Other persons raised issues of unemployment, the need for support programmes for youths and single parents, high levels of crime and the need for better roads.

In responding to the issues, Minister Mustapha said the Ministry is willing to work with the community to have the issues resolved.

“After listening to your issues, I’ve summarised that you need drainage and irrigation. Farmers need help in agriculture and people need jobs and other social services in the community. What I’ll be doing, like we did at other areas, is working with the communities to resolve these issues. These are not new issues because during my community engagements across the country, they all have the same or similar issues, especially that of drainage and irrigation. At the Ministry, we are encouraging you to get into agriculture and we will support you. We recognise the issues you have with drainage and we will be commencing work to enhance the community drainage and irrigation system first. I will have my technical officers meet with you on Friday to do an assessment of the works needed. They will submit a technical report to me so that we can decide how to properly resolve the issues. I was also informed that the internal drains in this area need rehabilitation so we will work to have these projects done. I will also have officers from the GLDA work along with the cattle farmers in the community to see how best we can assist you with improving the access to your pastures,” Minister Mustapha said.

He further stated that a team from the Ministry will be visiting the community on Wednesday afternoon to distribute plants to assist farmers who desire to expand their farming exercises.

Minister Mustapha also pledged to engage the Ministries of Public Works, Human Services and Home Affairs to address the issues of rehabilitation works to access roads, support programmes for youth and single parents and crime in the community.

Following the meeting, the subject Minister distributed a number of seeds to the meeting as part of the Ministry’s seed distribution exercise.

The Minister was accompanied by Director General, Mr. Madanlall Ramraj, Chief Technical Officer, Mr. George Jervis and other Heads of Departments of the Ministry.