The Prime Minister welcomed Ambassador Christensen to Guyana, and encouraged the diplomat to visit “places like the fantastic Iwokrama amongst many other eco tourist attractions.” 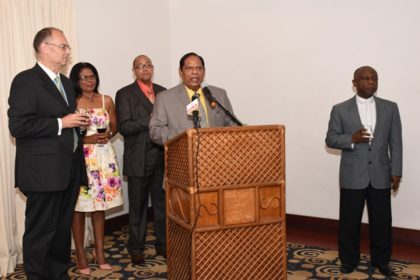 Prime Minister Moses Nagamootoo delivering brief remarks at the reception following the accreditation of the Danish Ambassador. The ambassador is to the left. Also in photo is Foreign Affairs Minister Carl Greenidge

The Prime Minister was giving brief remarks at a reception for the Danish Ambassador following his accreditation by President David Granger on Thursday. In attendance at the function at Herdmanston Lodge were Minister of Foreign Affairs, Carl Greenidge, Minister of Public Infrastructure, David Patterson, members of the diplomatic corps and other invitees.

During the accreditation ceremony, President Granger and Ambassador Christensen committed to ensuring that the existing friendly relations between the two countries are further strengthened for the benefit of both nations.

The Ambassador added that he will work to ensure that the relationship continues to bloom. 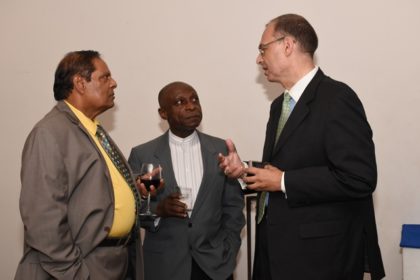