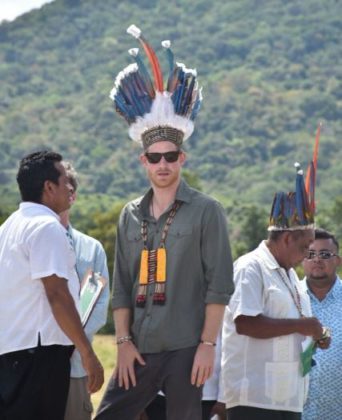 Prince Harry received an official welcome from the Surama villagers, around the gathering point of the village’s Totem Pole. He heard about Indigenous village life, and took a short trip to the village’s Eco Lodge to see how the community is embracing eco-tourism. Prince Harry donated books to students of the Surama Primary school and interacted with them, as well. In return, the Prince received tokens from the villagers.

At Iwokrama, Prince Harry unveiled a plaque in honour of his visit there. The Prince also visited the caiman pond where he saw ‘Sankar’, the famous caiman.

A meeting with rangers also took place with the Prince to learn about the conservation work carried out at the Iwokrama Reserve, and how steps are being taken to protect this important forest. Before arriving at the reserve, Prince Harry made a brief stop at Fairview Village, where reading materials were noted to the village’s school.

Prince Harry embarked on a short trek through the jungle to reach the Kaieteur Falls with local guides who explained the local flora and fauna of the area. Kaieteur is the single largest free-fall waterfall in the world, with a drop of 741 feet, making it nearly five times as high as Niagara Falls in Canada. 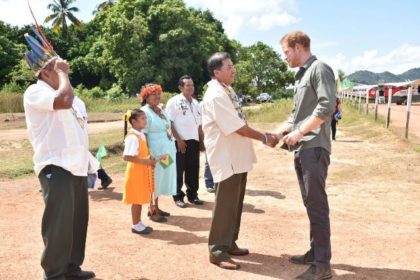 thanked the Prince for taking time out to share such a special moment with the people of the villages that he would have visited.

Minister Allicock told the Prince that persons living in the villages are fully following the laws of nature.

“The livelihood here is to exploit the natural resources without too much (damage),we can use latex and parks to create an industry to earn an income from,” Minister Allicock said.

The Indigenous Peoples’ Affairs  Minister noted that Guyana has had visitors from all around the world, and the people are happy that they would have gotten the chance to spend with His Royal Highness.

On Sunday, the Prince will visit the Joshua Children’s House, and meet with First Lady, Sandra Granger before departing the country.