Members of the private sector have come together to form the Guyana Oil and Gas Association (GOGA). The Association was launched last evening at the Marriott Hotel, Georgetown and aims to protect, promote and advance the responsible development of the oil and gas economy. 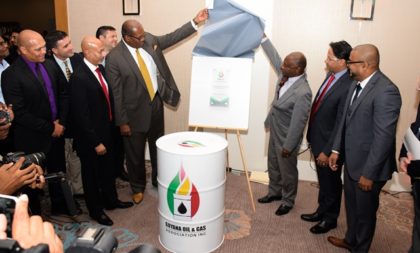 GOGA Director Nigel Hughes and Minister of Foreign Affairs Carl Greenidge unveil a commemorative plaque during the launch of the association.

Speaking at the launch, Vice President and Minister of Foreign Affairs, Carl Greenidge, said stakeholders’ involvement is important in the development of the sector.

“We believe that key stakeholders and their involvement are going to be important if that plan that we have for the appropriate development of the sector is going to be realised,” Greenidge said.

Stakeholder participation in the development of the oil and gas sector was also encouraged by the Inter-American Development Bank (IDB) Country Representative, Sophie Makonnen.

GOGA’s establishment stems from participation in the Newfoundland and Labrador Oil and Gas Association in 2012 by Guyanese businesspeople. This was facilitated by the High Commission of Canada to Guyana.

Canadian High Commissioner to Guyana, Pierre Giroux, said local businesses must continue to enhance their relevance to support the new industries that will emerge and to meet the demands of the future economy. He said, capacity building, product development and investing 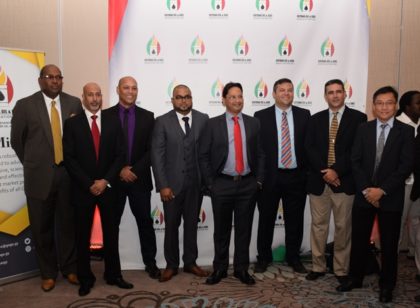 Founding members of the board of the Guyana Oil and Gas Association.

and developing manpower are essential to guarantee competitiveness of local businesses.

“I would like to call on the Guyanese Oil and Gas Association to continue to champion the responsible development of the local oil and gas economy and to position the organisation to be a key industry partner to the multi-sectorial approach to which government agencies and private sectors would evolve,” the High Commissioner charged.

GOGA’s President and CEO, Bobby Gossai Jr. pledged the association’s approach to transparency by working with all others for the greater benefits within the value chain.  “GOGA allows for the association to work with the government, international community, non-governmental organisations other private sector organisations and stakeholders to build a cohesive approach for the growth and development of our hydrocarbons sector,” Gossai said.

GOGA’s Director, Nigel Hughes, said the The company will host an international oil and gas conference next year as the Association intends to assist and to participate in the provision of training, certification and capacity building in all related industries and fields.”.