The Committee of Supply on Tuesday approved the proposed $38.5Billion allocated to the Ministry of Public Infrastructure for its current and capital expenditure during 2019.

The monies granted will enhance the Ministry’s policy development and administration, as well as public works and transport. 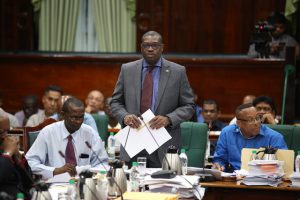 One critical project that will be funded from the allocated sum is the relaunching of a new Expression of Interest (EOI) of the New Demerara River Crossing at a cost of $100Million.

Minister of Public Infrastructure, David Patterson told the National Assembly that the sum will be used for consultancy services for the relaunching of the EOI for the new crossing.

“We will be relaunching the EOI based on these requirements: a high-level bridge with a minimum of four lanes, navigational clearance among others. This allocation covers the procurement of services for technical expertise in the fields of engineering, finance and the environment in order to review the proposals and maximise the benefit,” Minister Patterson explained.

The Minister further explained that the consultant, the Caribbean Development Bank (CDB) will advise the government on the way forward for the public procurement process.

The Minister of Public Infrastructure related to the National Assembly that the 11 companies that had originally bid for the project when it was slated to be a three-lane retractable bridge will be included in the new bidding process along with any other company that wishes to tender its bid.