Government’s plan for an educated nation has been reiterated by the Hon. Moses Nagamootoo, Prime Minister of the Cooperative Republic of Guyana.

On Wednesday, the Prime Minister visited several villages in the Upper Mazaruni region.

During his interaction with residents, and young people especially, the Prime Minister Nagamootoo reiterated the government’s plan for an educated nation, stating that the APNU+AFC administration will ensure that proceeds from oil and gas go directly to this initiative. 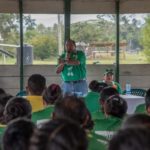 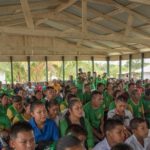 A section of the audience at Kamarang listening to Prime Minister Moses Nagamootoo.

“We intend in this government after the 2nd of March to return free education at the university. It is a right for all our young people to be educated, particularly now that we have oil and gas,” the Prime Minister stated.

His call is in keeping with that of His Excellency, President David Granger, who has repeatedly emphasised that education is the pathway to prosperity.

Prime Minister Nagamootoo made it clear that the government remains committed to continuing the development of the hinterland regions communities. He noted that the administration will continue on the path of transformation it began in 2015.

“We have to now prepare young people to be engineers, environmentalist, technicians, to prepare them for the future, and from oil, we will be having revenue to deal with all of this.”

“Eighty percent of our country is covered by virgin forest, beautiful forests that help to make Guyana the green lungs of the world. The whole world is looking at Guyana to see how we can save this planet. And the people who we give credit for this are our Indigenous peoples, they have been the great protectors of our country, great defenders of our natural resources.”

Adding that in this same way government will also guard the country’s patrimony and ensure that every Guyanese benefit from it.