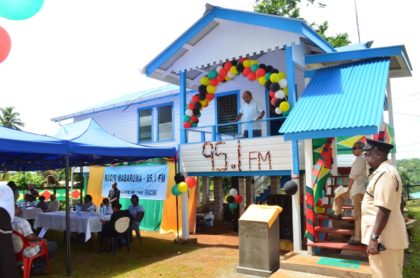 The Prime Minister was delivering the feature address at the time.

“You could advertise your commodities and people out there will know where to find the products so that way radio will stimulate economic activities. Radio is intended to bring monies in your pockets,” he said.

The Prime Minister also told residents, “You will have your own programmes from your own studios here in Mabaruma and you will be able to tell your own story.”

According to the Prime Minister, the government believes in inclusivity and that residents in the hinterland and riverain areas  must have equal access to all state services.

Recalling that Mabaruma has acquired township status the Prime Minister said this is the beginning of a transformation process.

The Prime Minister who has ministerial oversight of the information sector, said the establishment of community radio stations is part of his government’s efforts to connect Guyanese despite geographical locations.

The establishment of the radio station, he stated, is one way of bridging the gap and closing the communication divide.

Prime Minister Nagamootoo, speaking about Guyana’s advancement, stated that all indigenous communities must be part of the process, “People in the hinterland areas must be brought on stream with what is happening in the rest of Guyana and eventually a two-way communication will take place and we will start to carry news from interior areas, not only about indigenous peoples but also the news from the mining community, the forestry community and others,” he said.

The Prime Minister stated that the Coalition Government sees all Guyanese as one despite race, colour or religion adding that “President David Granger has asked that the development of hinterland communities be fast-tracked this year.” 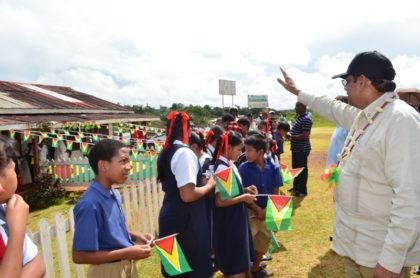 Prior to the commencement of the official programme this morning and shortly after the Prime Minister switched on Radio Mabaruma 95.1 FM, a recorded message from President Granger was aired.

In his message, the President stated that radio can be used as a tool to develop the communities in the hinterland. He called on the people of the region to work together in a united effort to foster the development of the region.

President Granger also reminded of the important role of social cohesion and asked that this be a motivating and developmental factor for the residents. The President congratulated the Prime Minister and the people of the region for the achievement.

Meanwhile, the Prime Minister explained that the administration feels that every region should have its own community radio station.

Project Coordinator, Dr. Rovin Deodat, in his brief remarks, told the audience that a month ago, he and the Prime Minister discussed the programmes and ideas for radio, those being 50% from the region and other content from NCN. He said that  for the moment, NCN will be relaying to Radio Mabaruma but, as time progresses, local programmes will be added to the airwaves.

Mayor of Mabaruma, Henry Rupert Smith, told the gathering that, “this is a historical occasion for Mabaruma, as it now has its first ever radio station.”  He further stated that the station can be used to showcase Mabaruma’s tourism, its agriculture products and it will provide the region with the latest news and other information. 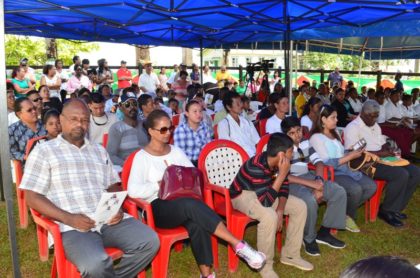 A section of the audience at the launching

Regional Councilor, Pamela Forde, said that the people of Region One are thankful for the initiative, “This is a testimony to how important we have become,” she said. She committed to working with the people of the region to have the Government’s vision of social cohesion become a reality.

The programme ended with Prime Minister Nagamootoo presenting several radio sets to Toshaos of the various communities within the region. Following the official programme, Minister of Indigenous Peoples’ Affairs, Sydney Allicock, Minister within the Ministry, Valerie Garrido-Lowe and Minister of Communities, Ronald Bulkan were the first guests to be interviewed in the radio studios.