The National Literacy Unit of the Ministry of Education is using students’ love of rap music to sensitise teachers on the possibilities that exist if they use this medium as a teaching tool. 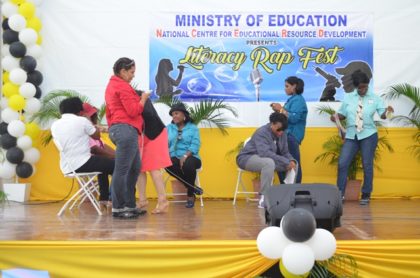 A ‘Rap Fest’ competition held at the North Ruimveldt Multilateral today, saw nine secondary students drawn from Regions Two, Four Five and Six singing rap songs that their peers would understand. The lyrics had to include words provided by the coordinators.

Collette Corlette-Horatio, Regional Literacy Coordinator, said that the event was undertaken to, “promote the message of learning styles and multiple intelligences…It aims to support the understanding that learners have different forms of intelligence and that teachers need to become aware of, and to cater to these intelligence within the classroom,” Corlette-Horatio said.

In an invited comment, Hudson, told the Government Information Agency (GINA) that the whole concept of literacy has to with phonetic awareness of letters and sounds. Hudson explained that the event is part of pushing the Five-Cs; (Communication, Cultures, Connections, Comparisons, and Communities). For the Communication goal area, teachers see how students use language in culturally appropriate ways and talk about, read about, write about, and learn about topics of interest or importance to them, more so, critical and creative thinking. 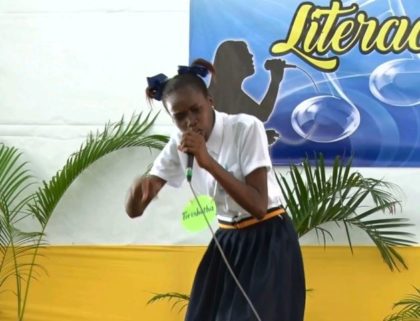 The competition had three stages. The first round saw the participants singing a prepared rap song. The songwas compiled using 10 words that would have been selected from a list of words supplied by the National Literacy Unit.

The nine contestants was pared down to six for the second round. In this round these six contestants had to sing a song ending with a word that they would have pulled from a bag just minutes before taking the stage.

The participants were judged on language and the dialect used in the songs. These could not mock nor ridicule anyone. The judges’ score was worth 80 per cent with the other 20 per cent given based on the response from the crowd.

The secondary school rap fest was part of the activities for Education Month which is being observed under the theme, “Each Child Matters: Stakeholders Unite for the Enhancement of Education.”