The Ministry of Public Health is preparing a country-wide re-launch of the Human Papilloma Virus (HPV) Vaccine shortly. To this end, the ministry in collaboration with UNICEF hosted a sensitisation session for civil society on its importance. 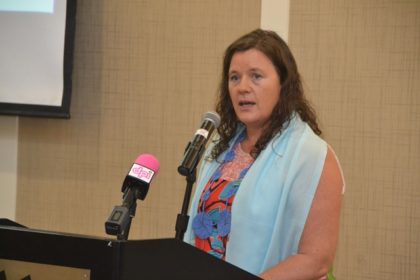 The session was held on Tuesday, October 3, at the Marriott where Consultant Obstetrician/Gynaecologist and Gynae-Oncologist, Dr. Vikash Chatrani delivered the relevant information needed for the stakeholders participating. They were reliably informed of everything concerning HPV, its effects as well as the purpose of the vaccine.

HPV is caused by a virus which is unlike Human Immunodeficiency Virus (HIV) or the Herpes Simplex Virus. Most HPV infections cause warts but of the 150 types of HPVs, 40 of these can affect the human body ‘below the belt’. Most of these are cancers of the cervix.

Based on information provided at the session, there are several types of HPV vaccines but Guyana will be utilising the quadrivalent, which prevents cervical cancer and genital warts. The vaccination is recommended by the Pan American Health Organisation (PAHO), World Health Organisation (WHO), Center for Disease Control (CDC) and the Caribbean Public Health Agency (CARPHA).

“Like any other vaccine, it works on the same principles, it boosts your immune system so that when you do come into contact with the HPV virus you are able to clear it from the body and prevent persistent infection”, Dr. Chatrani noted.

Supporting statistics presented earlier in the session,  UNICEF’s country representative in Guyana and Suriname, Sylvie Fouet, observed that cervical cancer which is the leading cause of death in Guyanese women, once detected will only shorten their lifespan. She emphasised the HPV vaccination method is likely to be the only strategy to control it.

Some of the stakeholders who attended the educational session to learn more of the Human Papilloma Virus vaccine.

“That (cervical cancer) accounts among 70 percent of the cancers, just to give you some background but the benefits of the vaccine in reducing the infection and the risk of cancer will be appreciated years and decades later,” the country representative from UNICEF explained.

She added that “recommendation is to have two doses given to the girls between  the age of 9 and 13, that’s the range and it will prevent the infection of two types of human papillomavirus.”

Since an initial launch of the HPV vaccine campaign in 2012, there have been misconceptions and myths with regard to the purpose of the vaccine and its side effects which resulted in the programme’s failure.

In 2012 campaign, 21,600 girls between the ages of 11-13 were vaccinated. At the time, the girls were required to receive three doses of the vaccine in order for their immune system to efficiently fight the HPV Virus.

Dr. Keisha Chin, Doctor-in-Charge of the East LaPenitence Health Centre, who spoke on behalf of the Minister of Public Health, revealed that “for the first dose, misconceptions and a lack of information to the public led to high dropouts for the second and third doses. In fact, between the years 2012 to 2014, 21,600 girls were vaccinated with no known reported cases of death or incident.” 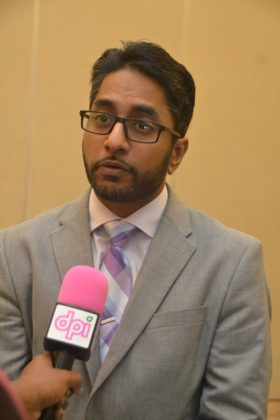 Dr. Chatrani also indicated that HPV is sexually transmitted and 70 percent of all men and women will be exposed to this virus throughout their lifetime. However, most persons are unaware they are infected, hence the push to vaccinate young girls.

Persons attending the seminar especially parents and teachers welcomed the move by the ministry to sensitise the general public on the upcoming campaign. Most parents expressed concern about the effects the vaccine would have on their children and being able to identify whether their daughters may be at risk.