The Ministry of Public Health has handed over a river ambulance to Region 10 and five passenger boats for several riverine communities.

The vessels were handed over to the respective Regional Health Officials (RHOs) on Tuesday at the compound of the Central Supplies Unit in Kingston, Georgetown.

The river ambulance was supplied by Meditron and cost some $17 Million while the five boats totalled $2.6 Million. 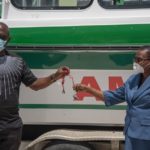 The river ambulance for the Upper Demerara river valued at $17M 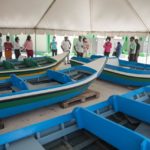 The five boats which are to be given to Regions Seven, Three, and other areas

RHO for Region 10 Dr. Pansy Armstrong noted that it was the second river ambulance the Upper Demerara-Berbice area had received within a year; the first was handed over in April 2019.

Dr. Armstrong said the new vessel “will be used in the Demerara River for healthcare delivery as well as to transport medical emergencies to the hospital.”

She explained that it would be stationed in the Malali area which is the furthest point on the Demerara River and will help make health care more accessible for the residents.

Meanwhile, Technical Advisor to the Public Health Minister, John Adams said the five boats would serve as river ambulances in the interim for far-flung riverine communities.

Two have been given to the Cuyuni-Mazaruni (Region 7), one to the West Demerara-Essequibo Islands (Region 3), while the other two will be designated to other areas.

To date, river ambulances have been handed over to Region 1 (specifically the Moruca sub-region), Santa Mission in Region 3, Baracara in the Canje Creek and Orealla in the Corentyne River, both in Region 6, and Bartica.