Minister of State, Hon, Dawn Hastings-Williams over the weekend took the Coalition Government’s message of development to the people of Cuyuni-Mazaruni (Region 7).

The State Minister travelled to Kamarang, Kako and Jawalla where she met and engaged with residents of the hinterland region. Minister Hastings outlined some of the many developments the region has seen over the past four years. 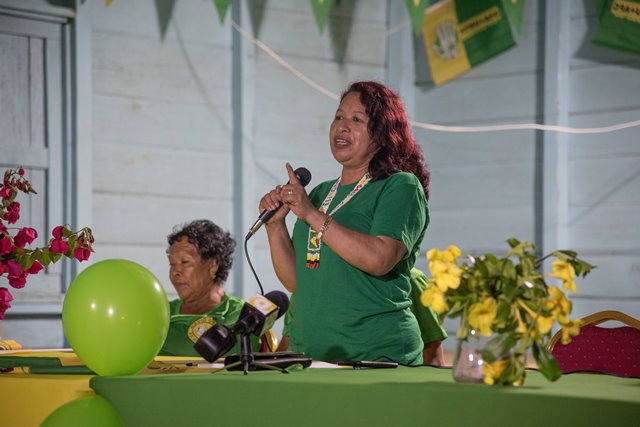 Among these are several major road projects included the Bartica-Potaro Road, the roadway between Issano and White Hill and the construction of a $303Million jungle highway.  As the government work to decentralise its services, this led to Bartica becoming a township. The new town also benefitted from the establishment of an $800M power plant. The region received a fully equipped river ambulance to boost the delivery of health care services to the residents in the riverine areas and two new schools were commissioned in Paruima and Kamarang.

The Minister reminded that the administration is working assiduously to ensure that citizens live comfortably wherever they are.

She also made use of the opportunity to clear misconceptions about Guyana’s Public Sharing Agreement (PSA) with ExxonMobil and its co-venturers Hess and CNOOC. At the meeting in Kamarang, she explained to the residents that the previous administration was in discussions for less than what the contract is today.

“When we came in 2015, the percentage the previous administration was bargaining for percent profile… so when we came, we had a negotiation with the explorers,” she explained.

The State Minister highlighted that it was under this administration, Guyana’s economic development skyrocketed placing Guyana on the international radar. She also noted that the revenues garnered from the country’s new natural resource will play a significant role in transforming Guyana’s economic and infrastructural structure significantly.