Residents of Linden and the surrounding Region 10 communities were updated on the expanding oil and gas sector, and opportunities it will offer by Minister of Natural Resources Raphael Trotman. The Minister, accompanied by several ministry officials, interacted with stakeholders on Wednesday evening at the Mackenzie High School. 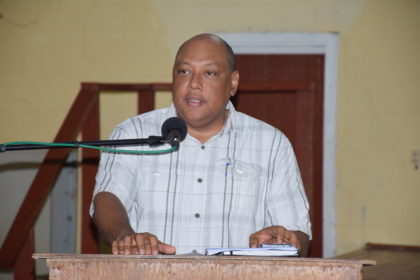 Minister of Natural Resources, Raphael Trotman addressing residents and other stakeholders of Region 10 stakeholders during a ministerial outreach at the Mackenzie High School on May 24, 2017

Highlighting the oil and gas sector’s progress, Minister Trotman cited the importance of the Sovereign Wealth Fund and its future benefits to Guyanese. He explained, “It will provide for budgetary support, if, for example, you declare a $200 billion budget for a year and there has been a flood or some other situation you did not anticipate, you may be able to enter the fund and to bring you back to the $200 billion.”

There will also be a strong focus on developing infrastructure, he added. He cited a few “stand out” projects. “One of them is a road from Lethem to Linden; second is the bridging of the Essequibo River at Kurupukari, and we also have to have a port more than likely somewhere in the Essequibo River. We anticipate that we will have a major hydro-power project and perhaps one other to supplement the major project. We would like to ensure that two and 300 years from now, Guyanese can benefit from this revenue, and that we don’t try to spend it all in 20 or 25 years.” 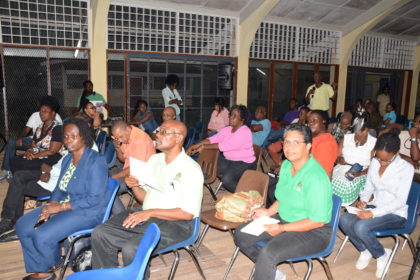 Linden residents and other Region 10 stakeholders during a ministerial outreach at the Mackenzie High School on May 24, 2017

from the sector. He stated that Government will spend a lot on social programmes such as healthcare and education, “So that every little boy or girl, it doesn’t matter who you are, can have the best education, that you can get in any part of the world because we will now be able to afford it, and we want to say the same for the health care system. Young or old, it doesn’t matter, we will all have the best health care that is available in any part of the world.”

Minister Trotman also announced that a supply base will be constructed locally to cater for the wells being drilled and government is looking at sites between Essequibo and Berbice. This, he noted, will create many spin-off jobs for caterers, truck drivers, labourers, machine operators and more. He emphasised that Government will do all that it can to ensure that Guyanese benefit as much as possible from the oil and gas revenues.