The two-day meeting will identify and validate implementation gaps at the national and regional level Minister of Foreign Affairs Carl Greenidge said. 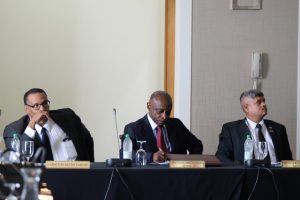 “This participation will help to deepen our understanding and appreciation of the regional approaches and priorities identified in the CARICOM strategy for regional implementation of this trade facilitation agreement,” Minister Greenidge explained.

Minister within the Ministry of Finance, Jaipaul Sharma, said the meeting is important to Guyana’s development. There are still a number of challenges to regional trade with member countries of CARICOM. “We need as a grouping, as a community to work together,” Minister Sharma said.

The Minister added that Guyana has been working to ensure that the ease of doing business is more efficient. On a regional level, he expressed a hope for increased lending by institutions such as the CDB and Islamic Development Bank.

The TFA allows world trade organisation (WTO) members who are involved in a customs union or regional economic arrangement to adopt regional approaches. This will assist in the implementation of the agreement’s provisions.

CARICOM’s Council for Trade and Economic Development (COTED) approved a regional strategy in 2017 to guide the implementation of the agreement’s 18 technical measures.

Assistant Secretary General of Trade and Economic Integration Ambassador Joseph Cox said the strategy will be the main tool to mobilise technical and financial support for the implementation of the TFA in member states.

“Regional approaches to trade facilitation are intended to harmonise and cross-border reform in order to create a consistent, coherent and predictable trade environment throughout the community,” Cox said.

The meeting is expected to provide recommendations to guide the development of a roadmap which prioritises the initiatives for implementation at the national and regional levels, taking into account the critical role of the private sector. 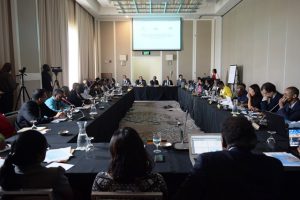 CARICOM in collaboration with CDB and Islamic Development Bank will engage in dialogue over the next two days on a strategy for regional implementation of the World Trade Organisation (WTO) agreement on trade facilitation agreement (TFA).