Remarks by the Honourable Moses Nagamootoo Prime Minister of the Cooperative Republic of Guyana On the Occasion of Spain’s National Day National Cultural Centre – Friday, October 14, 2016 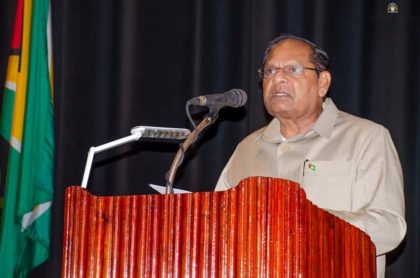 Today, I have the privilege of celebrating with you Spain’s National Day – Fiesta Nacional

de Espana. The Government and People of Guyana on this auspicious occasion extends warm felicitation to the Government and People of the Kingdom of Spain. The citizens of Spain should be justly proud as the day commemorates the arrival of Columbus in the Americas in 1906 and also celebrates the day of the Armed Forces in Spain; two most significant and historic events for the people of Spain.

Excellency, it would be remit of me on this occasion not to expound on Guyana/Spain’s relations which were established on October 12, 1979. While current relations between our two countries are cordial, there is need for strengthening and deepening of our bilateral relations. As you may be aware Excellency, the Government of Guyana is keen on advancing economic diplomacy and in this vain we seek to engage friendly countries and our development partners in this regard.

Spain in the past has played a meaningful role in its efforts to contribute significantly to our national well-being particularly in the area of training and rice project funding.  The Government of Guyana therefore expresses its appreciation for the support rendered and look forward to enhancing our co-operation with the Kingdom of Spain, particularly in the areas of trade, foreign direct investment, and security among other areas. It is hoped that Spain’s Honorary Consulate, in Guyana, will also help to boost these bilateral efforts.

The Government of Guyana looks forward to the conclusion of our proposed MOU on cooperation, the draft Agreement on Scientific and Technical Cooperation and the Agreement for the Reciprocal Promotion and Protection of Investments between Guyana and Spain and to concluding the elimination of visas for diplomatic passports.

Excellency, I wish to resound that there are several issues on the international agenda that are relevant to Guyana’s national interest and as such drives Government’s  commitment to address  issues such as economic cooperation, climate change (Paris Agreement), the promotion of peace, security, human rights, and the attainment of the Sustainable Development Goals.

Excellency, in concluding, I wish to reaffirm Guyana’s commitment to the enduring friendship with the Kingdom of Spain.