This year’s Republic Anniversary Distinguished Lecture is slated for Thursday, the 22nd of February, 2018 at 2 pm at the Umana Yana.  The 2018 guest lecturer is Dr. Natalie Hopkinson. 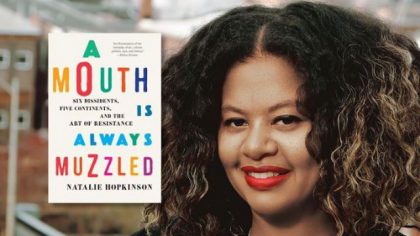 Dr. Hopkinson received her Bachelor of Arts in political science from Howard University, and a Masters in public journalism and a Doctorate in journalism and public communication from the University of Maryland.  She has written for the Washington Post and was one of the founding editors for The Root online magazine; she is currently a columnist for the Huffington Post.

She is the author of four books: “Go-Go Live: The Musical Life and Death of a Chocolate City” (Duke University Press, 2012); “Jay Stern: A Biography.” (Interactivity Foundation Press, 2010); “Deconstructing Tyrone: A New Look at Black Masculinity in the Hip-Hop Generation,” with co-author Natalie Y. Moore. (Cleis Press, 2006); and “A Mouth is Always Muzzled.” Feb. 2018. The New Press.

‘A Mouth is Always Muzzled’, the title taken from the famous Martin Carter poem, has received critical praise since its release.  Kirkus Reviews, states:

“ Neither strictly history, biography, art criticism, travelogue, nor manifesto, the book manages to combine all of those approaches to create a strikingly detailed portrait of a country seeking to define itself.”

In this year’s Republic Anniversary Lecture, Dr. Hopkinson will be exploring the theme, The Role of the Creative Arts in the Exercise of Citizenship in the Republic.  She will also be launching ‘A Mouth is Always Muzzled’ locally.

The public is invited.