Residents call for end to mining in buffer zones

Mining operations have been discovered within buffer zones in various communities in Region Eight. Buffer zones are areas along the bank of a river where mining is prohibited.

Minister within the Ministry of Indigenous Peoples’ Affairs, Valarie Garrido Lowe, said that the government is currently working to correct the situation. 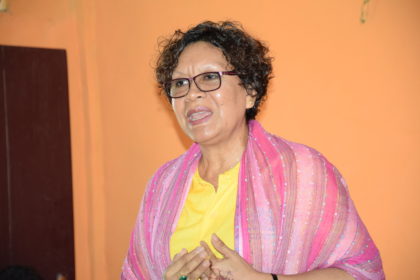 Minister within the Ministry of Indigenous Peoples’ Affairs, Valarie Garrido-Lowe addressing the residents of Region Eight during the Ministerial outreach

Minister Garrido-Lowe was addressing Toshaos and councillors of District One in Region Eight, where the residents complained of persons mining in buffer zones in Chenapou and other surrounding communities.

Minister of Social Cohesion, Dr. George Norton and Minister of Communities, Ronald Bulkan and other government officials were also part of the outreach.

Edward McGarrel, a resident of Chenapou, said that in 2016, a representative from the Guyana Geology and Mines Commission (GGMC) engaged the residents and informed them that it is illegal to mine in buffer zones. The residents are concerned that there may be mining blocks in the buffer zones in the region.

McGarrel said that the community does not have an issue with persons working in the mining areas, but it must be within the confines of the law and must not infringe on their livelihood.

Minister Garrido-Lowe said that talks are ongoing between the Ministries of Indigenous Peoples’ Affairs and Natural Resources with the aim of finding a solution to the issue of illegal activities in buffer zones.

“That matter is being address at the moment because we had about two meetings already and it is not only Chenapou, it is also happening in Micobie and other areas… We wouldn’t take a year to iron that out but we are working to see how we can give you positive results,” Minister Garrido-Lowe told the village leaders.

The minister noted that the activity has been ongoing for years and is embedded within the miners, and so there is a process that has to be followed to stop it..

There are a number of buffer zone requirements for mines, quarries and pits that help minimize and prevent impacts on the environment and nearby infrastructure such as roads and building. The general rule is that operations have to be at least 30 meters from property boundaries, infrastructure and environmentally significant features such as watercourses.

Buffer zones help to maintain the integrity of the course of the river, and prevent erosion which in turn reduces instances of turbidity.

During a recent interview with the Government Information Agency, GGMC,  Acting Commissioner, Newell Dennison, stated firmly that the commission is adopting zero tolerance against miners that mine along the banks of rivers.