Traffic Chief, Dion Moore charged the public to practice road safety, “since it’s everyone’s business.” He made the call at the launch of Road Safety Month at the Ministry of Public Security, Brickdam. 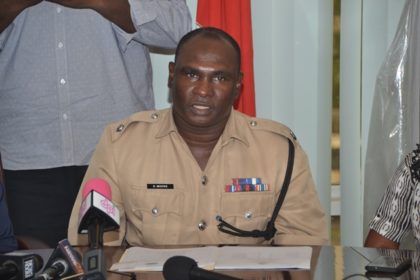 The month’s activities are a collaborative effort between the Guyana Police Force, the National Road Safety Council and other stakeholders. The theme for this year’s observance is “Making roads safer for everyone starts with you. Observe, think, drive, a second is all it takes to save a life.”

Moore said, if examined closely, the theme speaks to the necessary collective efforts on the part of the police and citizens. He reported that for the year 2017 to date, there have been 92 deaths as a result of 79 fatal accidents.

“Some would say that the figures are reducing but for us, one death is always too many”, the Traffic Chief stated. He further added that, “We must understand that our attitudes whilst we use the road, is of paramount importance.”

Citing an example, the Traffic Chief explained that, “as recent as this morning, I saw a mother crossing a child across the road. She held his hand, walked halfway on the pedestrian crossing then released that child… I advise if you are helping someone to cross the road, do it until that person reaches the other side. It is a dangerous practice. It is not right. It is not the correct thing to do.”

It was disclosed by the senior officer that during the month of November there will be an increased police presence on the road ways. The ranks will not only be enforcing the law but also encouraging drivers to practice road safety habits, he explained.

Additionally, the Traffic Chief commended the Ministry of Public Infrastructure for the role they have been playing in promoting road safety. He stated that, “You will notice within recent times construction of pedestrian overpasses. This initiative will help to reduce accidents at those busy intersections and junctions where they are placed.”

Included among the month’s activities are White Night campaigns, educational talks in schools and at bus parks, awareness talks on the radio and the teaching of defensive driving classes among others. The official launch of the activities will take place tomorrow in New Amsterdam, Berbice.

The Traffic Chief is reiterating the need for road users to exercise the Five Cs when using the road ways – Care, Courtesy, Consideration, Common Sense and Caution.