Sand Creek – a community ‘beyond compare’

Nestled in a valley surrounded by the Kanuku mountain range in South Central Rupununi, is the scenic and serene indigenous community of Sand Creek.

The entrance to Sand Creek.

This Region Nine village is considered to be the largest indigenous community in South Rupununi with approximately 1,600 residents.

The Village, which is mainly populated with persons from the Wapishana tribe, have incorporated a modern way of life into their traditions. There is a quintessential mix of traditionally built houses alongside concrete houses powered by solar energy, taps with running water in the yards or black tanks of water.

Villagers mostly walk, cycle, or hitch a ride on the community tractor to varying destinations. However, there are a few villagers with vehicles, mostly pickups, since the community can be accessed by road from Lethem.

The only road is intermittently shared with herds of cattle, sheep or horses on their way to graze in the open savannahs, as piglets and chickens roam free in yards. Stunning sunsets blaze on open fields where the youths participate in some friendly games of football.

Residents of Sand Creek reported that they are most proud of the developments the community has seen over the years. The village has a health facility with its own doctor, a nursery, primary and secondary school.

Toshao of Sand Creek, Derrick David told the Department of Public Information (DPI) that the community has undertaken the extension of its health facility and the rehabilitation of the agriculture building as part of its community development project. 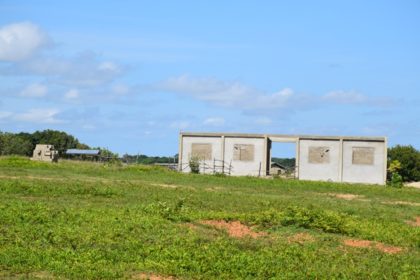 The teacher’s quarters under construction.

Residents of Sand Creek engage in the traditional agriculture and animal farming for their livelihood. The rehabilitation of their agriculture building is important to ensuring the success of crops and animals.

“The extension and offices (that we will put) there, is to have a veterinary officer. We have a lot of livestock so we need to have both the (Ministry of Agriculture) crop field officer and the vet in this place,” Toshao David told DPI.

Currently, the community is ‘recovering slowly’ from the devastating floods that affected Region Nine back in May. “There are a lot of work going on now by the farmers (who are) doing a lot of parching of farine and making cassava bread,” the Toashao explained.

This effort is to prevent the cassava crop from rotting after being water logged during the floods. “We made a request to the Community Development Officer for more farine pans to do parching because we don’t have much here and containers…that can take 20 gallons of cassava,” Tosaho David said.

Despite these challenges, the community leader is confident that Sand Creek will make a successful recovery and continue its developmental agenda. Future plans include creating more streets in the community and improving housing.

Giving back to the community

Toshao David said other development projects scheduled for the community include fencing the secondary school and constructing five apartments to house teachers.

For Dorothy Faria, the crowning achievement of Sand Creek is the establishment of the Secondary School. “Since we have the secondary school here whether you make the marks or not the children are going to secondary school which I am proud about,” she told theDPI. 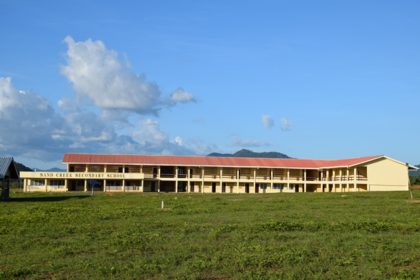 The Sand Creek Secondary School, which also has a dormitory, houses more than 200 students from ten indigenous communities in South Rupununi including Sand Creek.

The secondary school which is approximately seven years old was constructed under the previous administration with serious infrastructural defects. The Minister of Indigenous Peoples’ Affairs, Sydney Allicock, has since moved to have these issues addressed as an emergency intervention before the September term.

Faria, a Presbyterian, was born in the community’s only church. She was educated in the community before later becoming a teacher.  “I was a teacher for 21 years then I decided to leave and I am now a livestock farmer,” she said.

Sand Creek is beyond compare Faria boasted. “It’s the most beautiful village in South Central, or in fact, in Region Nine,” she said.

Faria noted “I would like to see the youths developing themselves going and educate themselves and come back as teachers, as doctors, as medics and CHWs (community health workers)”.

Faria’s wish has already come through as Tina Pugsley is giving back to her community by teaching at the secondary school. “I didn’t think that I like teaching.  I never thought of it as a career,” Pugsley told the DPI.

Pugsley began her career as a volunteer in her community and has now been teaching for a year. “I saw the need within the community and lack of resources, of course, so with whatever knowledge I would have gained in Georgetown I wanted to share back,” she explained.

Pugsley’s father was also a teacher and with encouragement from her community she decided to pursue teaching. “I just love the interaction with the kids. I feel a sense of pride in it knowing that I am passing my knowledge on.”

Equally important as education is the preservation of their culture. In particular a landmark.

“Growing up here was really, really fun,” Atkinson, who owns a ranch, shared of life in Sand Creek. He shared one particularly fond memory of a calabash tree that is supposedly as old as the community. “The calabash tree is older than me and I’m 64 years. We used to break whips to get licks in school. It is still standing there so I could imagine how old it is,” Paul Atkinson.

Atkinson was born and raised in Sand Creek and is a bit of a legend in the South Rupununi as a successful rodeo vaquero (cowboy). He began competing at age 17 and has won every competition he has participated in since.

He bemoaned the lack of interest by young people in speaking their indigenous dialect.

“Most of the kids today…we talk to them in Wapishana they answer you back in English so that is a little sad,” Atkinson told the DPI.

However, Atkinson is optimistic that as the younger ones in the community mature they will show more interest in their indigenous language. “We are trying to bring back the culture,” he noted.

The South Rupununi District Council (SRDC), of which Sand Creek is a part, is aiming to launch a website in September about the Wapishana people as they increase their efforts to preserve their culture.

An afternoon game of football. 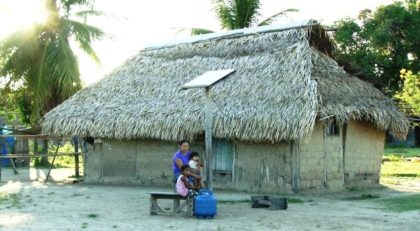 A family relaxing in the afternoon outside their traditionally built home. 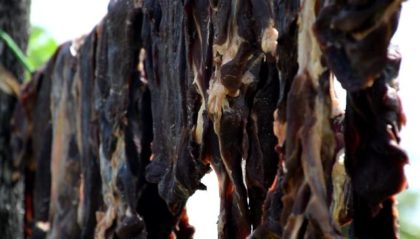 The traditional preservation of meat. 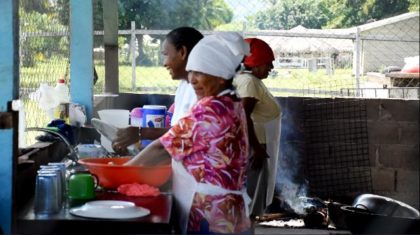 Preparing a meal in an outdoor kitchen. 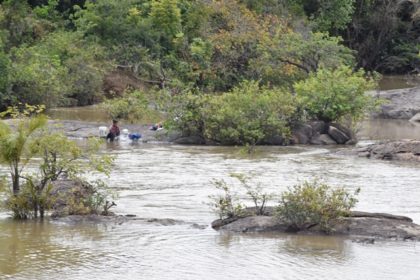 Sunday morning laundry: A resident washing clothes down by the Sand Creek river. 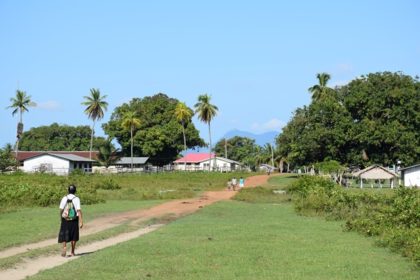 Residents of Sand Creek using the only road in the community. 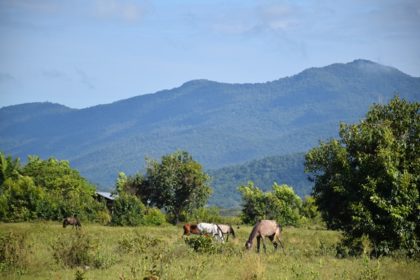 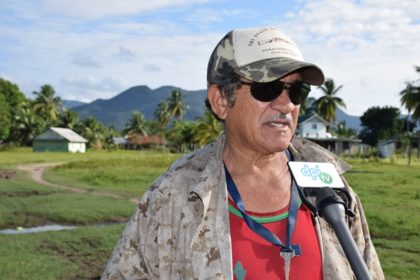 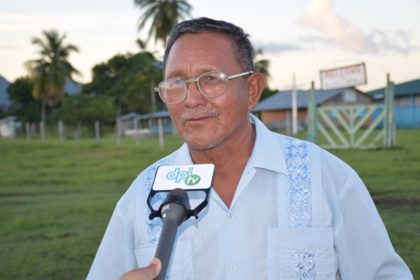 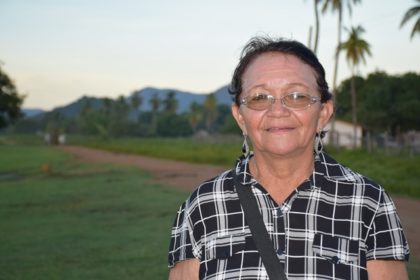 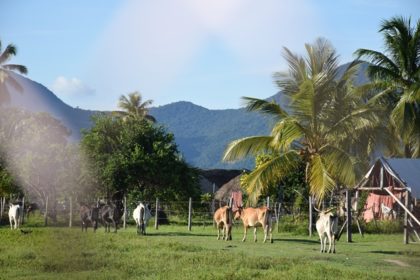 Cows strolling through the community.