This arch is part of the broader advocacy campaign to inform Guyanese of the importance of SDGs, and how they can be involved in building a better country. The goals are a universal set of goals, targets, and indicators that UN member states will be expected to use to frame their agendas and political policies. over the next 15 years. They also seek to end poverty, fight inequality and injustice, and tackle climate change.

Guyana, together with the United Nations, has begun to mobilise efforts to achieve the Sustainable Development Agenda by 2030.

Prime Minister Moses Nagamootoo, who is currently performing the functions of the president, in his remarks noted that the arch is a reminder that in the journey to achieving these goals, there are several are stepping stones. “In Guyana, we have been making incremental progress in our development to meet the basic needs and we count on the united nations to guide us and help us as a partner,” he said.

UN Resident Coordinator, Mikiko Tanaka pointed out that “the road to the SGDs is long and bumpy but we have to take the journey from where we stand.”

In an effort to educate the public on works of the 12 local UN agencies, there were a number of informational booths, on how to achieve the SDGs in Guyana. Suicide and mental health, HIV, and AIDS, food, and nutrition priority, and decentralisation are major areas the United Nations organisation is working to develop in Guyana.

In observance of United nations day, Secretary-General António Guterres remarked “The world’s problems transcend borders. We have to transcend our differences to transform our future. When we achieve human rights and human dignity for all people – they will build a peaceful, sustainable and just world”. 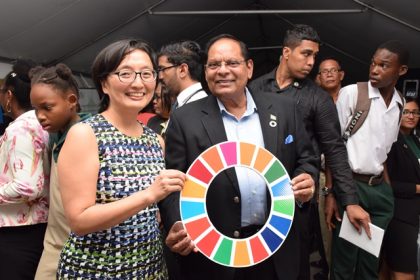 The arch being commissioned by Prime Minister Moses Nagamootoo. 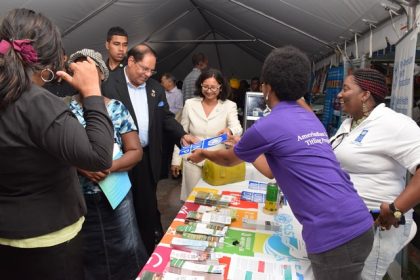 Prime Minister Moses Nagamootoo shares a moment with school children at the exhibition. 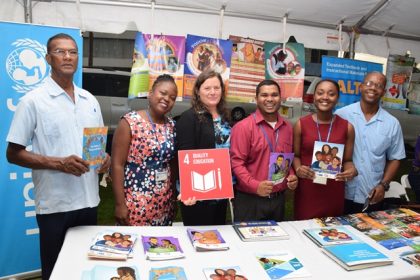 Some exhibitors of the UN displaying their brochures.