The Guyana Police Force (GPF) has recorded an 18 percent decrease in serious crimes at the end of August, when compared to the same period last year for which 12 percent was recorded.

The release stated that the relationship between the force and the public is improving significantly, because of the numerous community-related activities being conducted by ranks, together with the regular Face-the-Community Meetings by divisional commanders and other senior officers. 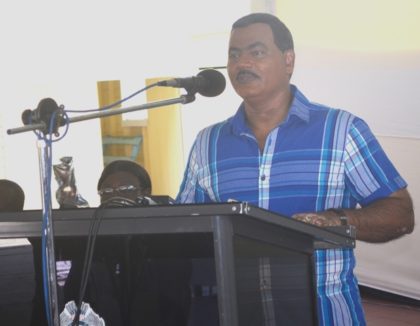 Earlier last month, Minister of Public Security Khemraj Ramjattan had told the Government Information Agency (GINA) that, “It is largely the increased patrols in areas and the information gathering mechanism from within the communities and even in the city and that has come about because of more trust in the police force by members of the community.”

The release also pointed out that training both locally and internationally, continues to be a top priority at all levels of the force. To date, 87 officers and other ranks have benefitted from overseas training from India, China, the United States (US), Russia, Argentina and Jamaica.

Ranks were exposed to training in the area of Financial Investigation, Fingerprinting Identification, Maritime Interdiction and Prosecution, Countering Organised Crime, Public Order Maintenance, Cyber Training, Footwear Impression and Identification, Counteraction against Terrorism and Extremism, and Surveillance and Counter Surveillance. Currently there are over 260 ranks undergoing the Basic Recruit Training at the three police colleges.

“We have also been receiving a lot of help through the Justice Education Society of Canada in terms of training, building capacity for investigators in the CID. They have a two-year contract and that’s going pretty well… we about a hundred and some ranks trained so far,” acting Commissioner of Police, David Ramnarine said during a recent interview with GINA.

The acting Commissioner also identified the Caribbean Basin Security Initiative (CBSI) and local organisations as giving much needed training to ranks of the GPF since the current administration took office.

The Cops and Faith Community Network continues to assist significantly in invigilating and marking of the Learner Driver Theoretical Examinations.

In terms of Juvenile Offenders, to date, 320 of such cases were dealt with countrywide, including one 189 males and 132 females, who have been spared the ignominy of the Criminal Justice System, due to intervention from the complainants/reporter, victims and police.

Meanwhile, on the issue of traffic management, the GPF has yet again seen an increase in road fatalities, with 87 fatalities recorded at the end of August this year, seven more than the same period last year.

However, there was a reduction in serious and minor accidents, but again an increase in damage accidents. Speeding, driving under the influence of alcohol and inattentiveness continue to be the main causes of fatal accidents. Traffic enforcement is continuous countrywide, with special emphasis on driving under the influence of alcohol, speeding, music/breach of condition of road service licence, overloaded minibuses and use of cellular phones while driving. Also the lecture to schools programme, and visible patrols at school areas are ongoing.