Great strides have been made in Region Seven to improve knowledge and recreational activities for youths, according to Region Seven Councillor, Hazel Allicock.

During an interview with the Government Information Agency (GINA), Allicock said that the Byderabo Multipurpose Complex was commissioned by the Bartica Interim Management Committee (IMC) under the Neighbourhood Democratic Council (NDC) in 2014. This facility is equipped with a computer laboratory, a library, an indoor gaming facility, and a small volleyball court. 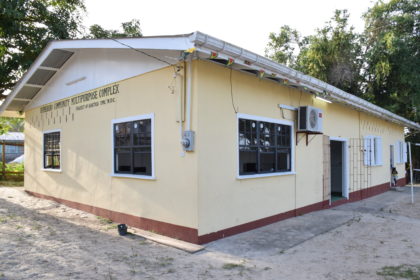 The Byderabo Mulipurpose Complex in Bartica

Councillor Allicock explained that the facility is now being fully utilised, and the intention is to ensure that youths in and around the Bartica Town have enough activities to occupy their spare time, thereby decreasing opportunities for involvement in unlawful activities.

There is a youth group and recently formed women’s group in the village of Byderabo, Allicock said, and both groups meet at the centre on weekdays and help children with Bible and craft classes. “Parents not only lend children books, but help them with their homework and that is a great big step for us here,” Allicock noted.

He expressed gratitude to the mayor and town council, and Minister of Communities Ronald Bulkan for collaborating and making the facility a reality.

In February, Commander of “F” Division (Lethem, Bartica and other Interior Locations) Ravindranauth Budhram and a team of police officers launched a literacy programme aimed at developing the reading and comprehension skills of the students in the region.

A section of the library in the Byderabo Mulipurpose Complex

Commander Budhram explained that there are several initiatives that are on-going to tackle youth involvement in crime. Four hundred (400) books and a computer printer were donated to the centre, and residents of the community dedicated one hour of their time, five days per week, to teach and help children with reading and other subjects.

Commander Budhram said that apart from the literacy initiative in Region Seven, another programme, the Drug Abuse Resistance Education (DARE) Programme is ongoing. In this programme, police officers go into the schools and educate the students on the dangers and consequences of using drugs. He explained that all the initiatives are aimed at educating and enlightening youths in the Region, to deter their involvement in criminal activities.

Meanwhile, Mariska Bell, speaking on the benefits of the recreational facilities said that in the afternoons, “I come and work out with the children help them to read. Most of them are weak in maths and so far I notice them catching on.” 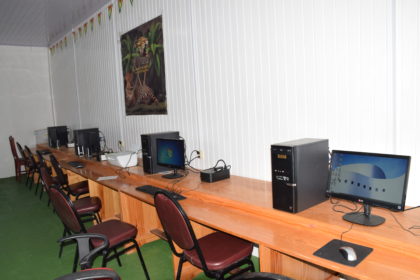 The computer lab at the Byderabo Mulipurpose Complex

She works mostly with Grade Six students, in Mathematics and English. She highlighted that, since she started working with the children they have improved and shown an interest in learning.

Oneil Decam, a 17-year-old youth, who uses the centre, said that, “everyone here is nice, and everything is working very well,” while noting that, “to be able to learn from the computers has enabled me a lot.”

A form one student, 12-year old Ashely Jairam has been visiting the centre since it opened, she helps younger children to read and play games, her favourite game is table tennis.

A six-year-old student, Lisa, said that she goes to the centre every afternoon to read and do her homework, and “I also bring my sister to learn.”