Critical areas in Regions Two, Three, Four, Five and Six will be lit, some for the first time, with high voltage light-emitting diode (LED) street lights.

Minister of Public Infrastructure, David Patterson said a first batch of 1,500 LED lights has arrived and will be installed shortly in several areas. The Government has received a grant from the Japanese Government for a total of 10,000 LED lamps; the remainder is expected to arrive shortly. 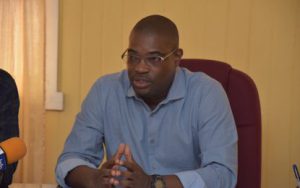 “Residents in select communities will benefit from the first batch. Namely Wakenaam as well as communities in Region Two from Supenaam to Anna Regina will be lit. In Region Three, from Vreed-en-Hoop to Nouvelle Flanders and Meten-Meer-Zorg to Plantain Walk, will also be lit”, Minister Patterson explained.

In Region Four, the complete length of Aubrey Barker Road, South Ruimveldt Georgetown and Bourda Market will also benefit from the LED lighting. Earlier in the year, rehabilitative works on Bourda Street were completed transforming the road into an asphaltic concrete structure. Minister Patterson said the much-needed illumination will further enhance the area.

Meanwhile, in Region Five, a section in Ithaca which was never lit is also slated to receive street lights. D’ Edward to Rosignol and Palmyra in Region Six, and Mackenzie and Wismar in Region Ten are also to benefit.

This project is part of the Infrastructure Ministry’s road improvement programme for 2018. Sodium-vapour lamps have long been popular lighting options for roadways. However, LED’s are more economically efficient and assist in a sizeable reduction of carbon footprints.

The LED streetlights’ usage is part of the President David Granger’s “Green Agenda”. This is aimed at ensuring that the country is built on environmental sustainability while balancing its economic development.