The Sheriff-Mandela road expansion project is now back on track following a period of suspension that began in November 2019. This is according to Minister of Public Infrastructure, Hon. David Patterson on Wednesday at a press conference.

With an injection of $6.4Billion, the road project will see the rehabilitation of pavements, construction of bridges, culverts and a pedestrian overhead walkway at North Ruimveldt, along with traffic and drainage upgrades.

The project was halted after the Inter-American Development Bank (IDB) ceased funding due to non-compliance of the contractor Sinohydro, with health, safety and traffic management standards. 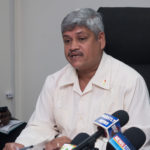 Hon. Jaipaul Sharma, Minister within the Ministry of Public Infrastructure 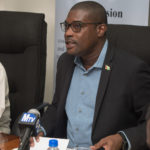 At the time of the suspension, Minister Patterson noted that the issues brought about by the the contractor’s negligence had persisted, even though the company was engaged on its shortcomings.

“Sinohydro was warned on several occasions to rectify these issues but unfortunately to date, the majority of failure identified have remained outstanding,” Minister Patterson had stated.

Nevertheless, the Public Infrastructure Minister at the time, said that the contractor will foot the bill for road safety works undertaken by the government.

“Whatever money we input we will recoup from the contractor. So, we will meet them [the contractor] next week and finalise that so that we can continue,” Minister Patterson explained.

Outlined are the Ministry’s goals and intended outcomes in executing the project:

Minister within the Ministry of Public Infrastructure, Hon. Jaipaul Sharma was also present at the press conference.