A national symposium focused on addressing the protection, promotion and support of exclusive breastfeeding was held today as part of activities in observance of National Breastfeeding Week that began on September 18.

Minister of Public Health, Dr. George Norton delivering an address at the event held at the National Cultural Centre, urged local recreational businesses to create and put in place infrastructure that will facilitate and support exclusive breastfeeding. 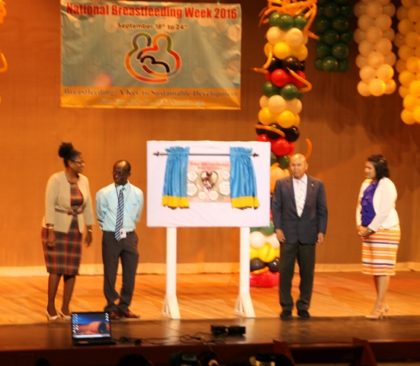 Minister of Public Health Dr. George Norton and PAHO/WHO country representative, Dr. William Adu-Krow and other officials after the unveiling of a breastfeeding message at the symposium on breastfeeding

The minister said, “Breastfeeding is everybody’s business” and that the implementation of the six-month maternity leave is soon to be part of Guyana’s legislation.

The PAHO/WHO representative supported the six-month maternity leave for mothers and said that through the strengthening of health information systems, workplaces will be able to better support this implementation.

WHO regards breastfeeding as the normal way of providing young infants with the nutrients they need for healthy growth and development. Virtually all mothers can breastfeed, provided they have accurate information, and the support of their family, the health care system and society at large.

The theme of this year’s National Breastfeeding Week is, ‘Breastfeeding: a key to sustainable development’. It speaks to breastfeeding being the key element in recreating the way people think towards valuing well-being from the start of life. The theme also shows the links among breastfeeding and the 17 Sustainable Development Goals (SDGs) that Guyana along with other countries signed onto in 2015. 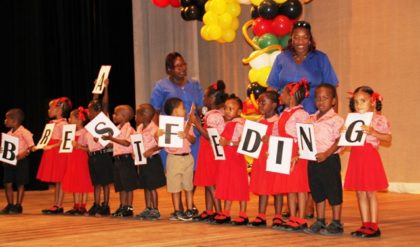 The expansion of exclusive breastfeeding awareness is currently being facilitated through accreditation of a number of hospitals to ‘baby friendly status’. Eleven (11) hospitals attained baby friendly hospital status under the Ministry of Public Health’s Baby Friendly Hospitals Initiative (BHFI). This initiative, in collaboration with the WHO and the United Nations Children’s Fund (UNICEF), seeks to recognise health institutions adhering to the breastfeeding policy.

Twenty-nine (29) other local hospitals are expected to attain baby friendly status after their evaluation. It has been noted that only 38 percent of babies across the world are exclusively breast fed.

A large billboard, highlighting the ministry’s full support of exclusive breastfeeding will be erected during this week at the football field, east of the Public Health Ministry, Brickdam.