The Guyana Sugar Corporation (GUYSUCO) Skeldon Estate has committed to providing non-academic support to the Skeldon High School to aid the delivery of education and help eliminate some of the social ills affecting students.

Minister of Social Protection, Volda Lawrence recently held a meeting with Deputy Head Master (DHM) of the school, Chandradeo Mahadeo and Senior Teacher Candacie McGregor. She revealed that General Manager, Skeldon Estate, Karamchand Ramdeo had agreed to send machinery to have the school’s ground upgraded. This would facilitate physical education and sport. 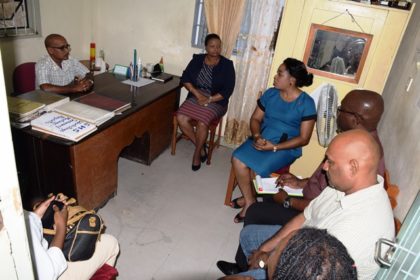 The minister’s visit follows calls from residents at a village meeting and a television call-in programme. The residents pointed out that many of the female students from the Skeldon Secondary School wear makeup to school, are often improperly dressed, linger after school and some children do not attend school.

Lawrence noted that the school needs to be proactive in handling such matters. She called for collaboration among parents, the Ministry of Education, Non-Governmental Organisations (NGOs), Social Workers, the police, medical practitioners and the town council to make the school better and address the issues.

“It must be a collaborative approach; you can form a concerned group and attack these issues. The world has changed so you have to reach out for help, you cannot do it alone, especially since you may have students who you only see their parents when they register and never again,” the Minister explained. 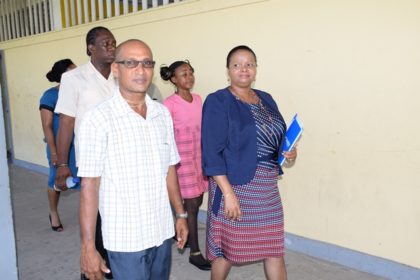 Minister of Social Protection, Volda Lawrence having a walk through at the Skeldon High School led by HM Chandradeo Mahadeo

Mahadeo noted that the school is trying its best to alleviate some of the social ills they encounter. “We would encourage the students to go home after school and work along with the police to ensure that …  outside vendors do not sell illicit items to the school children.”

Senior Teacher McGregor echoed that indeed the family structure is responsible for most of the mishaps in the school. She said many of the parents do not participate or support the school. “Most cases when there is a Parent Teacher Association meeting most of the parents of those children who behave badly in school do not come, only the students who behave good,” McGregor said.

The senior teacher indicated that the school has well qualified teachers who are willing to work with the stakeholders to enhance the delivery of education and make the school a better place.

The students will have access to the ground shortly. McGregor hopes that the ground would help to keep many of the students occupied in health activities and out of trouble.

Minister Lawrence said the aim of her ministry is to take the government to the people and provide solutions to all problems and her visit at the school was to address issues that are of concern to the community.