Twelve years ago, cosmetology provided an occupation for a jobless Jennelle Blackman-Jones who is about to open her school of cosmetology – Urban Oasis Cosmetology School.

The school will provide training for about 50 students at a time, offering courses in Hair Dressing, Nail Technology, Waxing, Facials and Massaging.

Blackman-Jones initially began by offering just a course in Nail Technology. However, following good reviews from her students, she decided to recruit one of her former tutors to collaborate with her to offer more courses to interested persons.

The now successful cosmetologist originally never planned to have a career in the beauty business. “After finishing school, I wrote CXC and CAPE, I had planned to keep furthering my education and working in the corporate world,” she told the Department of Public Information (DPI).

However, after writing the Scholastic Assessment Test (SAT), applying and being accepted to various colleges, the lack of sponsorship hindered her plans to pursue higher studies. After spending two years at home, Blackman-Jones decided to find something to occupy her time. “I was sending applications all over and I just wasn’t getting a job,” she explained

Initially, Blackman-Jones was not too enamoured of the profession but approached it professionally nonetheless. “I always put my best foot forward… I was still hopeful of getting another job but it just never happened and I’ve never known any other job than what I’m doing presently.” With time, she grew to like her new profession and decided to move forward and make a career of it.

The beauty-business entrepreneur explained that she was inspired to start her cosmetology school after realising there was a need for improvements in current training systems. “After completing my course there were a lot of things that I still didn’t know as it related to my skill, things that I thought I should have known that were not taught to me, things that I had to learn through trial and error… there are things that can make your job less complicated if you were thought the way you were supposed to,” Blackman-Jones noted. 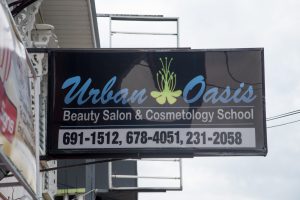 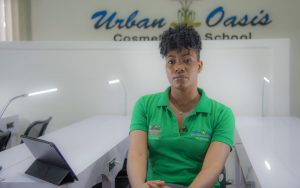 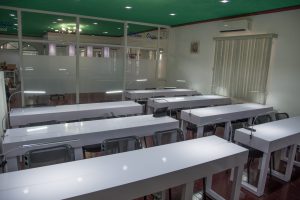 This drove her to make the learning experience better for her students. “It’s not that complicated, it’s just the fundamentals that were overlooked”

She noted that in the beauty industry, there are positives and negatives and made the choice to ensure her teaching and working environments are “places of comfort, not only for my clients but for persons working there. I always say you spend most of your productive hours there, then it must be a place where you should be happy and comfortable because it affects you which in turn will affect your productivity…” she said, adding, “every improvement that I have made in the school in terms of space and comfort is as a result of an improvement on a negative that I would have experienced.”

While the school will be providing the courses listed, Blackman-Jones has other plans to expand as well as offer workshops and specialized courses facilitated by trained professionals.

The Urban Oasis Cosmetology School will also be partnering with government and non-governmental organisations to provide subsidised training and will also help students with job placements by partnering with other salons while payment plans are available.

On completion of their training, students will be issued with a certificate accredited by TVET, courses begin on October 7. Blackman-Jones is assuring prospective students that the school will have trained and experienced tutors who are prepared to meet the needs of every student.