Stakeholders from across the country will tomorrow meet to validate the contents of the Ministry of Social Cohesion’s Draft Strategic Plan 2017-2021 at a National Validation Exercise at the Marriott Hotel. The one-day exercise will allow participants of the country-wide consultation sessions, held by the Ministry, to review and provide final input for the completion of the strategic plan. 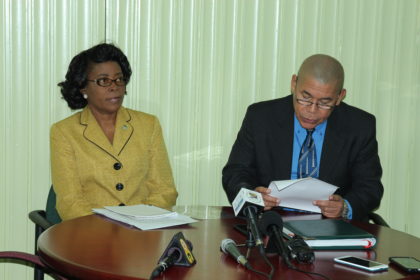 Minister of Social Cohesion, Dr. George Norton, at a Press Conference today, said that he is pleased that the Strategic Plan has reached this stage and looks forward to having it finalised. “The plan gives attention to [five thematic areas], examining possible areas for intervention. This would be deliberated on by stakeholders. We look forward to full participation from duty bearers and continued engagement of all constituents as the Ministry moves towards implementation of the 2017-2021 Plan for building a socially cohesive Guyana,” he said.

The Ministry, over the past year, hosted 30 consultations countrywide, which sought to garner input from stakeholders in all the municipalities and administrative regions. Stakeholders were invited to provide comments on the five thematic areas; promotion of economic equity and opportunities for all, enhancement of citizen safety and security, promotion of social inclusion and tolerance, strengthening inclusive and participatory governance; and promoting harmonious ethnic and race relations.

On February 14, a Draft Strategic Plan was released to the public to allow for national input. Lead Consultant, Dr. Theo Gittens, who is responsible for the compilation of the plan and facilitated the national consultations, has reviewed the comments received following the publication of the draft document. Comments, which were provided to the Ministry before March 10, are also reflected in the Draft Plan.

Programme Coordinator, Ms. Sharon Patterson said that once the document is finalised, the Ministry will move on to the implementation phase. “We will then move toward the strengthening of capacities of regional and municipal officials, persons in the municipalities and the regions, who will be involved in the process. We are looking at empowering and connecting with institutions, both at central and regional level, statutory commissions and so on and we will work with them. We will also look at programmatic actions at the community level – we will be working with communities so barriers can be removed and we can work toward building a unified Guyana,” she said.

A total of 1,485 stakeholders participated in the 30 consultations hosted countrywide by the Ministry of Social Cohesion. The process is being supported by the United Nations Development Programme (UNDP).