The Social Protection Ministry will be implementing new measures in 2017 to tackle what it describes as the serious breakdown in family units. One such measure is the establishment of night care centres for those parents who work at nights.

Minister of Social Protection, Volda Lawrence says the centres will be established under the Early Childhood Development programme. 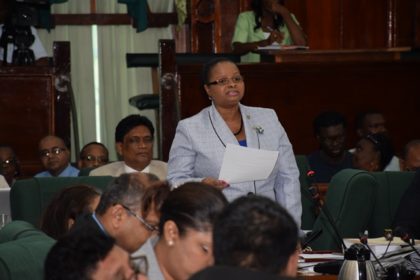 Minister of Social Protection, Volda Lawrence during her 2017 budget debate

Minister Lawrence, on a recent televised programme explained that the Ministry will be working with the Early Childhood Development Centres (ECD) to ensure that those night care centres meet with minimum standards set out by the Ministry. She said this initiative will help the Ministry to better take care of children.

The Social Protection Minister explained that family lives are broken and children are forced to endure bullyism, peer pressure and sexual violence in the school system, and at home because they are not properly guided by adults. The new programmes will be implemented to tackle this issue.

“Within the budget (2017), there are several things for children and family. When we look at the family under the Child Protection Agency (CPA) we are going to start several programmes, one of which is to bring awareness of the issues which confront our children in the home and outside of the home,” Minister Lawrence explained.

Minister Lawrence further explained that the programmes are expected to extend countrywide, to benefit Guyanese at large, and will also focus on encouraging persons to foster children. According to Minister Lawrence, there are a large number of children in state care who do not enjoy the benefit of a family life.

“We will be focusing on many of the corporations and the businesses to try to get persons to understand what it is about fostering so that we can have more of those children taken out of the homes and placed with families. When we started government in 2015, we focused on two things, one is to remove the large number of children that is in state care into family homes, and two, to focus on the family,” Minister Lawrence pointed out.

In 2017, the Social Protection Ministry will also be rehabilitating one of the buildings in the Mahaica Hospital compound to provide a home for boys and girls with disabilities. The Ministry will also collaborate with the Region Six Regional Democratic Council (RDC) to provide two homes for abused children.