Social workers were warned by Minister of Social Protection, Amna Ally of the consequences defrauding seniors of their annuity, as pension book distribution is slated for November 20. 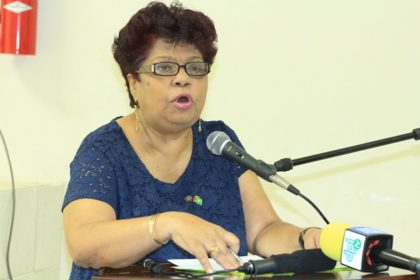 During a workshop today at the Guyana Police Force Training Centre, social workers were briefed on the next distribution exercise of pension books. Minister Ally in her remarks advised social workers not to attempt to convert the pensions for personal use.

The Minister warned that once persons are caught in the act, she will not hesitate to have charges filed, followed by subsequent dismissal. “We will not condone that. Regardless if it is one book, ten books, a hundred books, you are to do what you are supposed to do” the Minister reiterated.

She also sternly cautioned, “this Minister is a little different, I am not dealing with suspension, I am dealing with dismissal.” 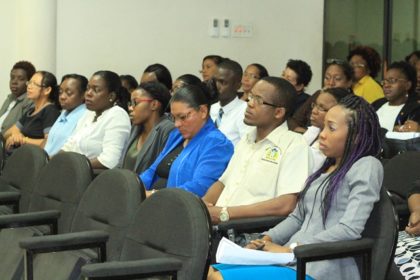 Social workers during the workshop.

According to Minister Ally, several persons who were caught attempting to defraud pensioners are currently suspended.

“That is why we called you here this morning to remind you and to tell you what is expected of you so that you will be prepared and you will know that if you go outside of the rules, anything could happen,” she remarked.

Additionally, social workers were also reminded to be vigilant of persons who may try to illegally cash more than three pension books. Only toshaos are exempt from this rule. They were also asked by the Minister to be more aware of pensioners holding Guyanese citizenship but opt to collect their pension whilst residing overseas. Minister Ally said Guyana has limited resource and “the people who live here must be able to benefit.”

The distribution of pension books will be carried out for a period of three weeks.