Teachers and students of the Lake Tapakuma Primary School have received a much-needed boost with the donation of five 8A8D Heavy-Duty Deep Cycle solar batteries from the Department of Social Cohesion.

Handing over the batteries to Headteacher Haslyn Williams, Minister of Social Cohesion Hon. Dr. George remarked “I am glad that we were able to do provide these batteries for the benefit of our children…the coalition government believes that only through education can our future leaders rise.”

The batteries were acquired through a collaboration between the Department of Social Cohesion and the Ministry of Natural Resources, following a request made during a community outreach. 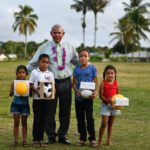 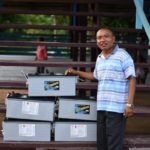 The Headteacher explained that the school had been operating without electricity for about two years. This affected the several classes, in particular, the educational radio programmes. “We were given batteries in 2010 and everything was going great but then they died. We have been asking for assistance to fix this issue and now it has. I am grateful to all involved.”

Minister Norton also distributed footballs, volleyballs and uniform to the several youths in the community.

With a population of 400 residents, the village Tapakuma (also known as St Deny’s Mission) lies 12 miles (27 km) from Anna Regina. It has approximately 15,000 acres of land space where farming and logging are the main sources of income.