Three floods which severely affected residents of Region Five was the impetus for the National Drainage and Irrigation Authority’s (NDIA) sole sourcing for the rehabilitation of the drainage pumps at Trafalgar to relieve flood-fatigued residents of further hardships.

Acting Chief Executive Officer (CEO) of the NDIA, Frederick Flatts stated that during this current rainy season, three floods in Region Five were mainly caused by the fact that the pumps at Trafalgar were inoperable because they were vandalised two years ago and were never repaired. 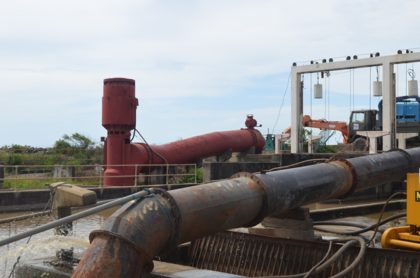 In the background – one of the non-functioning pumps to be rehabilitated at Trafalgar, Region 5

“The NDIA had programmed to rehabilitate these pumps this year, and the intention was to do so before the rainy season commences in November. Following the first three floods, residents were highly agitated, and as we all know, on one occasion they even blocked traffic on the public road. Based on that, we decided to go ahead immediately and advertise for the rehab of the two vandalised pumps or the station,” Flatts stated.

Explaining the decision to cancel advertisements for bids and single source for the rehabilitation works, Flatts said, “We advertised and during the period before bids were received there was yet another flood. This flood was the largest flood because of it being extended to Litchfield instead of being limited to the Bushlot and Tempe areas. I believe that we needed to take an immediate step to sort out the flooding. I felt that if we had gone through the long process, then there would be flooding again.”

Further, Flatts said while he understands and empathises with the ‘frustration’ felt by contractors interested in tendering for the rehabilitative works, his intended actions were advertised and a telephone number published for contact to be made with the drainage authority. 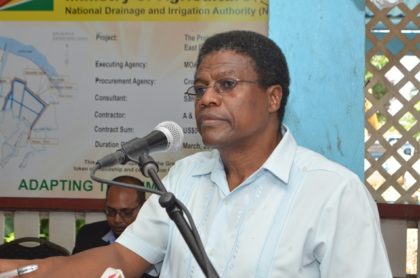 “We advertised in the newspaper that the bid process was being nullified. We immediately got someone to carry out the work. The person we chose is the person who had actually set up the pump station a few years ago, and therefore we thought he was the best person to carry out any rehab. So far we have been able to get one pump working and the generator working. The second pump has more problems than we reckoned, but it is currently being rehabilitated. As I speak there has been a lot of rain in Region Five today, August 16. I believe it is fortunate we have that pump working because we possibly would have gone in for another period of flooding,” Flatts said.

The acting CEO said that other works inclusive of fixing the control room and installation of a perimeter fence and lights, to prevent a repeat of vandalism to the pumps, have been identified and are anticipated to be completed in another three weeks’ time.

The vandalised pumps have a combined capacity to drain almost 3,000 gallons of water per second. The NDIA is tasked with the maintenance of drainage structures, and works in collaboration with various agencies to prevent and alleviate the effects of widespread flooding.

During the May/June extended rainy season, the authority was called upon to assist the MMA district to deal with flooding caused by a combination of factors including non-functioning drainage pumps, a silted outfall channel and rice farmers releasing excess water into the main drainage channel.