─ both countries to deepen relations in areas of mining, technical expertise, training, among others

The South African delegation, currently in Guyana on a visit, was given a tour of a lifetime as they were taken to visit the Iwokrama River Lodge and Research Centre, then to Kaieteur Falls. 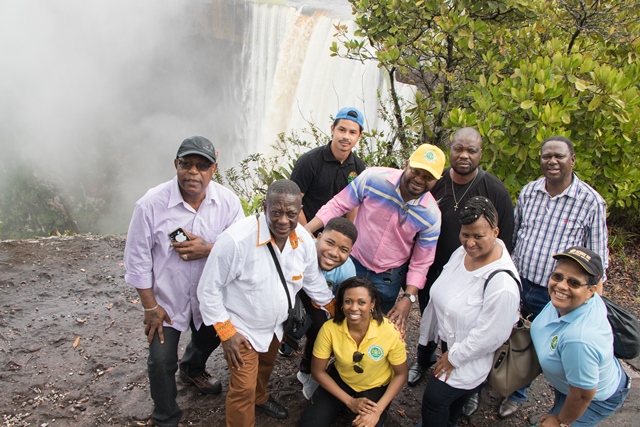 Deputy Minister of Mineral Resources of South Africa, Godfrey Oliphant, his team and the Ministry of Natural Resources staff at Kaieteur Falls. 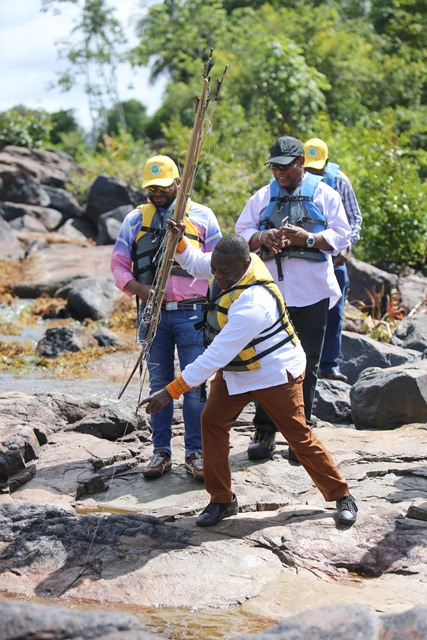 Deputy Minister of Mineral Resources of South Africa, Godfrey Oliphant try some spearfishing at the Kurupukari rapids up the Essequibo River. 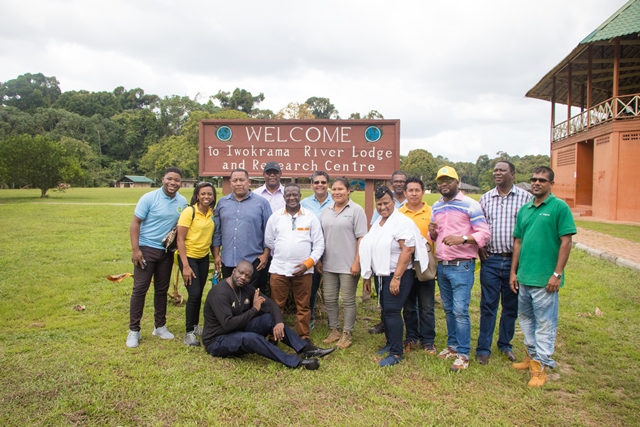 Deputy Minister of Mineral Resources of South Africa, Godfrey Oliphant and his team at the Iwokrama River Lodge and Research Centre.

The visit which began early Tuesday morning to Iwokrama, located in the heart of the Guiana Shield, one of the four last pristine tropical forests in the world, has been described as “breathtaking” by the visitors.

“We came for a mining visit, but we got far more than we bargained for, we are grateful that we have seen the natural forest, the freshwater rivers that are very neat and clean… this is what needs to be preserved,” said the South African minister.

He added that even as both counties explore opportunities in mining “we must ensure that environmental protection receives key priorities”.

He said: “We are glad to be here, we are thankful… Guyana is beautiful… this is the most beautiful part of nature I have ever seen.”

The Iwokrama forest, measuring approximately one million acres, was pledged by late President Desmond Hoyte to the international community at the 1989 Commonwealth Heads of Government Meeting, for purposes of research into sustainable management and development of tropical rain forests.

It is one of the four last pristine tropical forests in the world. The others are; Congo, New Guinea, and the Amazon rainforest.

The group was then taken to Kaieteur Falls, the world’s largest single drop waterfall, located on the Potaro River in the Kaieteur National Park.

While there, the South African delegation was in awe of the majestic waterfall. Deputy Minister Oliphant noted the falls “magnificence”.

The Government of Guyana through the Ministry of Natural Resources from February 24 to March 2, 2019, is hosting the South Africa delegation led by the Deputy Minister of Mineral Resources, Godfrey Oliphant.

On Monday, the group met for official introduction and discussion with Minister of Natural, Resources Trotman.

Both countries hope to deepen exchanges on a government to government level in areas of mining.