– Eight water wells to slated to be drilled

Some five dozen members of the Brazilian Army Engineering and Construction Battalion (BEC) are expected to arrive in Aishalton, Region Nine later this month to begin drilling of water wells in the South Rupununi. 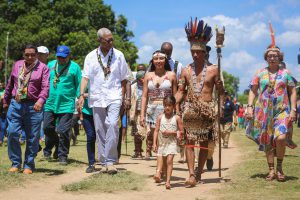 Regional Chairman of Region Nine, Brian Allicock, made the announcement at Heritage Day in Shulinab on Saturday, September 15.

President David Granger said the project is important to stimulating economic development in the South Rupununi. “Once you have the wells and once you have water for your animals and your crops we can move closer towards food security,” the President said.

BEC is expected to drill some eight wells in eight indigenous villages from South Rupununi which will provide water security to villages during the dry season in the Region.

The project is part of a Complementary Agreement to the Basic Agreement on Technical Cooperation signed between the Presidents of Guyana and Brazil last year, to develop infrastructure projects. President Granger made an official state visit to Brazil last December.