More than one hundred and twenty hinterland students attending tertiary institutions in Georgetown will soon benefit from a state of the art dormitory as plans are already in motion to ensure this project becomes a reality.

Just recently Ministers Sydney Allicock and Valerie Garrido-Lowe engaged Kalitech Inc. Engineering Design and Supervisory Consultants which is tasked with completing the design of the building which will be located in the compound of the current student dormitory in Liliendaal on the East Coast of Demerara. 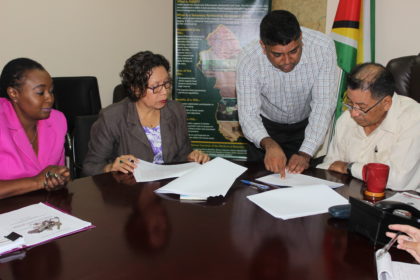 During the engagement Minister within the Ministry Valerie Garrido-Lowe was confident the design will meet the needs of the students who will be housed there.

Meanwhile, Minister Allicock said he is happy to report that “the new wing to accommodate students from the hinterland is now at a higher level with the completion of the draft, the estimates and agreeing upon the design which I’m very pleased with. There’s just the except of a few additional components such as the walls to be of wood and cupboards in the building and to use better roofing material rather than zinc we could probably could have tar shingles put there, something that could last for the next thirty years”.

The Minister said emphasis should be placed on the roofing since efforts in becoming a green Guyana remain at the forefront, and moving in that direction will ensure this is achieved.

The Minister also advised that based on the building’s design more students can be accommodated should the need arise.

“As of now the design can accommodate one hundred and twenty students but if needs be, it could be adjusted to accommodate a hundred and forty or a hundred and fifty more students and this building is expected to be completed by the end of this year so I am very happy that eventually we will be able to have this facility that is so badly needed for the education of our young people to help us build this beautiful nation.”.

The new facility will boast male and female self-contained rooms to accommodate one hundred and twenty students, living quarters for a Dorm Mother and father, a unique water storage system and recreational area among other amenities.

Over the past ten years, an estimated six hundred students have benefited from hinterland scholarships to attend a number of tertiary institutions including the Guyana Technical Institute (GTI), Carnegie School of Home Economics, the Guyana School of Agriculture (GSA) and the Guyana Industrial Technical Center (GITC) both resident and non-resident.

Additionally, scholarships were offered to Hinterland students’ attending the University of Guyana in 1986, however, since the Public Service Ministry (P.S.M.) offers scholarships to students desirous of attending University, a decision was taken in 2000 not to sponsor these students but to have them apply to P.S.M.

Building an educated nation remains a high priority for this government, thus the drive to ensuring youth particularly from the hinterland receive a well-rounded education.