(June 11, 2019) – The St. Joseph High School emerged the winners of the National Insurance Scheme’s 50th Anniversary Debating Competition as they competed against Queens College in the intensely debated finals held today at the National Centre for Education Resource Development (NCERD).

The students of St. Joseph’s High School receiving their prizes as winners of the debating competition (Ministry of Education photo)

Students of the St. Joseph’s High School team collaborating on their rebuttal (Ministry of Education photo)

The moot that was debated in the final round of the competition today was: “Improved Information Technology will enhance the services offered to contributors and pensioners by the National Insurance Scheme.” The Queen’s College students Christine Richardson, Ayjha Griffith, Lorelei Kanhai and Tatyana Alli (backup) proposed the moot while the St. Joseph High School students Carmalita Byrne, Chelsea Forde and Adaiah Lawrence opposed the moot.

Ms. Chelsea Forde of St. Joseph High School was adjudged the best speaker. According to Ms. Forde, who was her school’s first speaker, she is thankful for the opportunity that was given to her school to participate in the competition.

The first speaker for Queen’s College, Ms. Christine Richardson also expressed her gratitude for the opportunity to participate in the competition. She added that her school will return on the next occasion a much better and stronger team as they utilise the skills that were assessed.

During the presentation of prizes ceremony, General Manager of NIS, Mrs. Holly Greaves said that her entity is grateful to the Ministry of Education for partnering to execute the competition successfully.

She said that one objective of the 50th Anniversary observances of the NIS is to bring about public awareness to the NIS.

She said that persons can now realise that the NIS is fulfilling its Corporate Social Responsibility by providing income for the elderly.

According to Mrs. Greaves, the competition gives students the opportunity to showcase the talents and efforts of great research.

Chairman of the NIS Board, Mr. John Seeram said that the students that participated in the competition should benefit immensely from research on the topics debated. He advised that debating competitions should be a regular feature in secondary schools.

He congratulated all the other schools that participated in the competition and urged them not to be discouraged for not winning as they would have gained knowledge and skills to enhance their presentation techniques for future engagements.

Mrs. Trotman thanked the NIS for its investment in the education of the nation’s children. 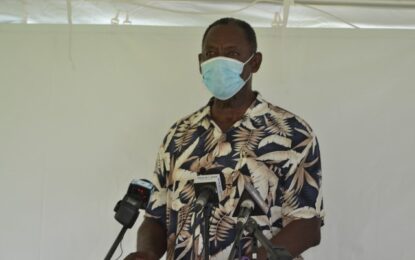 National recount must not be trampled on – GTUC General Secretary

Author Details Alexis Rodney Author email alexis.rodney@dpi.gov.gy —says future of Guyana, every citizen must be paramount. DPI, Guyana, Sunday, May 31, 2020 The Guyana Trades Union Congress (GTUC) is lending its voice to the ongoing national recount of the votes of the March 2, 2020, General and... END_OF_DOCUMENT_TOKEN_TO_BE_REPLACED

GWI to drill additional wells in 2020