‘Stop operating like crabs in barrel, we have a country to build’- Minister Allicock to the Opposition

Minister of Indigenous Peoples’ Affairs, Sydney Allicock earlier today said the Ministry continues to work in close collaboration with the Institute of Applied Science and Technology (IAST), the Ministries of Business and Agriculture to promote the development of new products using some of the abundant natural resources available in the hinterland.

The Minister said, some $1 Billion was injected into 154 communities and villages, funding projects in agricultural production and processing, village infrastructure, tourism, manufacturing, village business enterprise, and transportation to name a few.

The recently-launched SAK purple potato drink, Rupununi Essence, Pakaraima Flavours, Sundried Tomato Ketchup and Salad dressing were displayed to the House this evening as Minister of Indigenous Peoples’ Affair Sydney Allicock sought to lay bare Opposition MP Yvonne Pearson claims that no known indigenous products were created under the Coalition Government and that there was no evidence of development through the HEYS programme 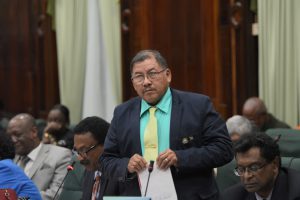 He also reminded that a number of hinterland youths who received training under the Hinterland Entrepreneurship and Youth Service (HEYS) are involved in these projects.

“…our hinterland youths are no longer in front of Parliament protesting in sun and rain. Today, our young people are working and producing

According to Miinster Allicock in 2019, the ministry will continue to provide training in financial accountability, leadership and capacity building to overcome challenges some villages face in these projects.

Additionally, he noted that fundamental to the development of villages and the bridging of the gap between the hinterland and coast is the role of technology, as such, 2019 will see the investment of $375 Million to equip hinterland communities with ICT hubs, via satellite, benefiting over 11,390 residents.

The sum of $38.5 Billion is to be allocated to expand and maintain the infrastructure in the hinterland. This will result in improved movement of people and goods, enhanced resilience of the coastal and riverain communities, bridge the divide between hinterland and coast.  $101 Million was also allocated to continue and extend the electrification programme to Orealla, Kwakwanu, Siparuta and Waramouri among other communities and additional water wells will also be dug to benefit the residents living in over 200 indigenous communities.

The Bina Hill Green Enterprise Development Centre, which will be completed in 2019 at a cost of $200 Million will also benefit some 120 youths annually.

Minister Allicock emphasised that the principles of the SDGs, GSDS and the Ten-point Plan for Indigenous Development will be also reflected in the use of proceeds from the emerging oil industry towards the continued protection of the natural environment through the development of educational facilities to impart to the nation and the world, the opportunity to discover undiscovered education of the hinterland.

He emphatically urged members of the opposition to stop “acting like crabs in a barrel” and support the forward thrust of the APNU + AFC government as it continues to bring development to the hinterland and coastal communities across the country.

According to Minister Allicock “What budget 2019 seeks to do – transform the economy, empower the people and build sustainable communities – the Ministry’s seeks to do the same.”   He noted that the theme of budget 2019 is completely aligned with the vision of the Ministry which is to ensure that all of Guyana’s indigenous peoples and communities are empowered to have a better quality of life now and for future generation.

“Over the last three and a half years, the Ministry has been continuously working on the good life, especially through indigenous youths. However, Sir, the situation we met was one which the previous administration left – one of distrust, dependency and political manipulation of Guyana’s heartland people, an overwhelming situation which led to their inevitable removal as the government of the day. Sir, we have had to rebuild a foundation of trust and teach growth, this is an ongoing exercise that we remain true to.”’