Synthetic tracks to boost athletics in Regions Six and Ten

Two synthetic tracks for athletic facilities in New Amsterdam and Wismar may soon pave the way to produce Guyana’s own Usain Bolt!

Bids have been entered for the tracks to be laid at the Bayroc Community Centre ground in Wismar, Linden at an engineer’s estimate of $205.7Million and the Burnham Park Sporting Facilities, New Amsterdam, estimated at $176.4Million. 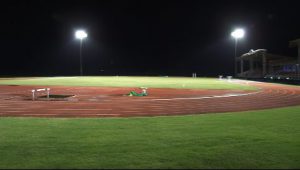 The track and field centre in Region Three, Leonora.

Both facilities will be outfitted with eight-lane, 400-metre tracks. However, two of four phases for the synthetic track in Region 10 have already being completed. This was disclosed by Minister of Social Cohesion Dr. George Norton during a recent visit.

In 2017, Guyana earned a total of 35 medals in track and field which includes, eight goal medals, 12 silver medals, and 15 bronzes medal, at various regional and international events.