“We feel really good and we know that we developed an Application that is worth the first-place prize. We hope that it will benefit the Agricultural sector because it does need something like this,” Deenauth Mohabeer, leader of Team Innoys, first place winners of CODESPRINT 2017. 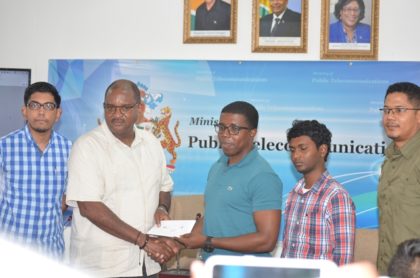 CODESPRINT similar to a Hackathon, is a programme which falls under the purview of the Ministry of Public Telecommunications. The concept of CODESPRINT was for the teams to design for a practical Agricultural Commodities Trade Exchange Application (App)that will be put to use in Guyana.

Some of the features in the winning App ‘FarmersMarketGY.com’ include the ability to gauge the freshness of products, rating of product, and the ability for Farmers to pay cash and review after a transaction is completed.

Mohabeer explained that his team had an advantage since his family owns a farm. This allowed them to be in regular communication, thereby helping them to better understand what farmers needed in the Agricultural sector.  His team took home $300,000.

Essentially the new ‘App’ will bring producers, sellers and buyers of plantains, pumpkins and other vegetables; fruits, dairy products, beef, pork and other locally produced foods into a single online marketplace. 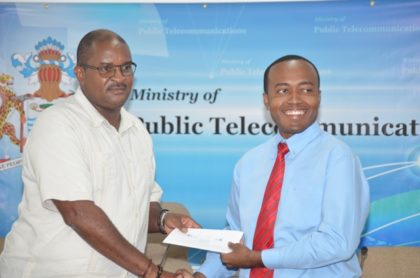 The second-place prize of $200,000 went to UV3Media. Leader Jason Barnwell shared that despite the challenges, his team was able to develop an App to the best of their ability. Some of the highlights of the UV3Media Application include, statistical system, the total dollar value of the item, multiple vendors could use the Application to sell their products.

Third place was awarded to Team IntellectStorm who received $150,000.  Team Leader Amrita Ramnauth said they were happy with their placement, however the team will go back to the drawing board and make a few changes to the App.

Ministerial Advisor to the Minister of Telecommunications, Lance Hinds said that the teams had four weeks to conduct research and present to the judges with their Application last Saturday. 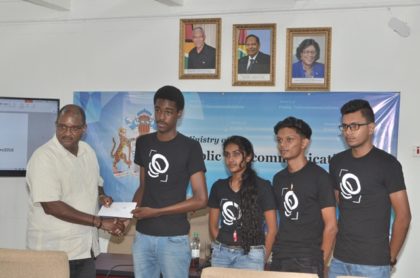 “It was a bit of a back and forth about (choosing the winner), because scope was given to the teams to apply as much innovation as they wanted to. We took a look at the kind of effort you made to make sure that you got the basic things that we required,” Hinds shared.

Hinds added that, while there was a push for innovation, the Ministry and the judges were cognizant of the fact that the teams still had to incorporate aspects such as user friendliness to ensure that the application flowed from one feature to the other.

The Ministerial Advisor noted that meetings will be held with the respective winners to make recommendations on, if any, changes to the Apps are required.

Importantly, the App when implemented will be able to link farmers in the Pomeroon or in Region Seven, Cuyuni Mazaruni, for example with Barbadian hotels or resorts in Mexico, Alaska and even in Asia.  It is expected to resolve the age-old marketing problem which has been forcing farmers in Guyana to sell off their produce below market value or to discard them.