The Telecommunications Bill, Bill No. 15 of 2016 will set the framework and become the transformational agent for the overall improvement of the lives of all Guyanese and the building of the 21st century economy. This was told to the National Assembly this evening by Minister of Public Telecommunications Cathy Hughes as she rose to present the Bill for its second reading in the House.

Delivering her opening statement prior to the commencement of the debate on the Bill, Minister Hughes explained that the Telecommunications Bill is a most significant and tangible indication of the commitment of the Government to the progress and development of Guyana. 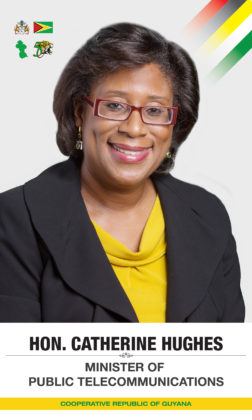 “We recognise the tremendous and increasing impact that the telecommunications sector has on the advancement of economies and societies around the world. This Bill is a major breakthrough for the telecommunications sector in Guyana.  It has been long promised and I am indeed proud to present the Bill for debate and passage by this honourable House,” Minister Hughes stated.

Critical to this improvement, the Minister stated, is the creation of a telecommunications sector that is competitive and flexible enough to meet the needs of a modern, rapidly evolving technological environment.

“This transition is long overdue, our telecommunications sector must be an open one so that Guyana could progress in this area of service provision and delivery, not lag behind other sister CARICOM countries and most of the rest of the world. Let me assure this House and the nation as a whole that the Government’s focus and commitment to this process is absolute and unconditional,” Hughes declared.

The Minister explained that the Government believes that this eagerly awaited landmark legislation will provide for the fostering of an open, competitive telecommunications sector where new market entrants and investors, large and small, will be inspired and attracted to invest in the sector.

“The several clauses of the Bill have been carefully drafted and firmly established that this is a most forward looking piece of legislation designed to set Guyana firmly and fully on par with the most developed countries of the world in the provision of telecommunication services,” the Public Telecommunications Minister added.

Opposition Member of Parliament and former Minister of Tourism Industry and Commerce, Irfaan Ali in his contribution to the debate said his party is desirous of having the Bill sent to a select committee since they have several concerns with the way it is written. Ali explained that, the Bill gives too much power to the Minister and instead it should be placed in the agency that will be established to manage the sector.

Lending support to the Bill and outlining Government’s plans for the development of the telecoms sector, Minister of State, Joseph Harmon, told the National Assembly that, “this Bill is historic, not only because it brings an end to the marathon journey of consultations, but also because it closes the chapter of Guyana being the only English speaking Caribbean country to still have in place a virtual monopoly in the telecommunication sector.”

The Minister of State told the House that prior to acceding to office, the APNU+AFC coalition promised Guyanese to provide a new regime of a competitive and liberalised telecommunication sector, “and I am happy to say that just one year after we have the Bill on the floor of the House for debate.”

Minister Harmon in rebutting statements made by opposition member Ali, who stated during his presentation that the Fibre Optic Cable project is the signature project of the former Government, informed the House that, that project cost Guyana US$42M, commencing in 2011 and ‘abandoned’ in 2013.

“This is after over US$6M was spent on the cable itself, a cable that is virtually useless, that was meant to link Georgetown with Lethem to bring internet service from Brazil into Guyana…the Government at that time picked the wrong people for that project,” Minister Harmon told the House.

Responding to the statements that the Bill gives too much power to the Minister, Minister Harmon argued that the Bill was composed with the recommendations made by the Special Select Committee under the Tenth parliament.

“We discussed all of that, we put brakes on the Minister in the special Bill, in fact we were being told in the Special Select Committee, that y’all (you all) better be careful because if you are taking away all these powers from the Minister, one of these days one of you might become a minister and you will have no power…we believe that democracy is important and we are going to proceed with this Bill  as it came out of the special select committee and this is what we have before the House,” Harmon stated.

The committee met over 32 times to discuss the Bill and significant refining was done to it. “What you find here in this Bill represents by and large the discussions and the deliberations that took place in this special select committee,” Harmon added.

Meanwhile, explaining in detail the provisions of the Bill, Minister of Foreign Affairs Carl Greenidge stated that, “as far as the charges we were given to ensure the broad objective of liberalisation and reforms were met by given separate functions to minister- minister was responsible for policy oversight- the clauses made reference to- minister responsible for policy and does not give power to determine, implement or so on- where policy is being made he has to get advice either from the commission or authority as per their specific area of competence.”

Minister Greenidge argued that the legislation honours commitments the previous government made which, “we believe are important and relevant. We respect our roles of the three actors- no inconsistency. Obviously at times they overlap but powers exercised by ministers have been constrained- the board is equipped with review power and deal with activities, performance and disciplining within the agencies, on the basis of the discussion. It clearly is a very complicated technical area, on the basis I believe we have every reason to argue it’s not necessary to be sent to special select committee.”

The Minister ended his presentation by asking the opposition members to do the honourable thing and embrace the Bill.