Prime Minister Perry Christie of The Bahamas has reiterated emphatic and unequivocal support for Guyana, with regard to the Venezuela border controversy and supported President David Granger’s call for closer synergies and cooperation in the areas of tourism, industry and agriculture.  The Bahamian Head of State made these remarks at a State Dinner at the Hilton Hotel hosted by Governor-General, Dame Marguerite Pindling, in honour of President Granger’s Official visit to that country.

Speaking at the event, the Prime Minister said, “We stand in complete and utter rock solid solidarity with our brothers from Guyana in their international dispute with their neighbour Venezuela. We have worked with them through CARICOM [Caribbean Community] as much as is possible to foster an imitable and equitable resolution to their dispute and we will continue to lend our best offices in this regard.” Pointing out that Guyana and The Bahamas has a historical long and productive relationship, starting with the close friendship between former President of Guyana, H.E. Forbes Burnham and founding Prime Minister of The Bahamas, Sir Lynden Pindling, Prime Minister Christie said that there are significant areas of possible cooperation between the two states.

“I wish to adopt the view of President Granger that our region should explore synergies with the product of sun, sand and sea on the one hand and the wonder of flora, fauna and waterfalls of the continent on which stands Guyana, Suriname and Belize. The President has articulated the differences that exist between our countries and the strength of the differences and being able to capture that as we market our region. I pointed out to the business community at Grand Bahama that Guyana’s close cooperation should be a particular interest of the business community here in the Bahamas and I encourage exploration in this regard. The idea is to explore and establish contracts and synergies in as many areas as possible between our countries and that of mutual benefit,” he said.

President Granger, who was accompanied by Minister of Foreign Affairs, Mr. Carl Greenidge, Minister of Agriculture, Mr. Noel Holder and Minister of Business, Mr. Dominic Gaskin, pointed out that while Guyana has abundant resources, The Bahamas has the capital and the knowledge, having become an economic leader in the region.  He added that it is through cooperation that the region can build on its strengths to further diversify the small economies of the region.  The Guyanese Head of State noted, particularly, that Guyana and The Bahamas has the opportunity to deepen cooperation to better meet the challenges faced by their citizens.

“There is no blue in the Guyana flag. There is no green in the Bahamas flag and that means a lot. It means that together we can combine our different talents to create that holistic image of the Caribbean. We believe that we have a world class biodiversity tourism product. We came here yesterday to learn from the Bahamas about how to sell that product because you have done remarkably well in selling your tourism product to the world. Guyana also has extensive lands suitable for agricultural developments. In fact, I don’t say so boastfully, [but] we are 15 times the size of the Bahamas. It means that we see our self as the hinterland of the Caribbean. Belize, Guyana and Suriname together are bigger than Germany, we are bigger than Japan but we are one region and if we realise our strength, if we recognise how powerful we are we will move together much more quickly and much further along the road of development. So we have come here not only to learn but also to sell some of our agricultural produce,” President Granger said.

Speaking on wider regional cooperation, President Granger said that despite the Caribbean region’s early history of conflict and the vast sea space that separates island states and those on the mainland, CARICOM states have managed to create a unique community and a zone of peace.  He noted that despite the relatively small size of the countries that make up CARICOM, when those states speak with one voice, it forces the world to listen.

He added that The Bahamas is an example to the rest of the region on how small states can advance economically.  “We came here with open minds to look and to learn; learn from this wonderful archipelago of islands and particularly, the impressive strides it has made in its economy. It is now no longer merely a small island developing state. It has made remarkable economic strides. It is ranked as one of the leading economies in the Caribbean. It is a major financial sector in the Caribbean and a success story for us all. Its tourism product attracts over six million tourists per year. It has become a global powerhouse in athletics. It has demonstrated that smallness does not translate to weakness. It has proven that a small state could be a big player in the financial services, tourism and sport.

Prime Minister Christie, also speaking on the importance of regional cooperation said that Guyana has been a leader in that regard and recognised the country’s role in ensuring regional integration.  He added that it is fitting that President Granger is visiting The Bahamas as the sitting Chairman of CARICOM.

He said, “We remember respectfully and with a sense of gratitude that Guyana was  among the four founding countries, among the four original signatories of the Treaty of Chaguaramas that gave us the Caribbean Community of which we are a part today. We thank them for their foresight and their commitment to the idea of Caribbean unity. In addition to offering deserved tribute to Guyana, for its role in the creation of CARICOM, we also recall that there were pioneers of the outreach to Cuba, which has ultimately and properly resulted in tremendous forward motion for that country in regional affairs.”

The fact that the Bahamian health and educational sectors has been bolstered by a large number of Guyanese teachers was not lost of the Prime Minister as he noted that his country has been a beneficiary of those immigrants, who benefitted from significant investments in their training in their home country.  Dame Pindling, in her remarks also referenced this point saying that Guyana has developed significant expertise in health and education training and this assisted tremendously in the development of those services in The Bahamas.  She also spoke on the importance of the visit.

“This visit is so important to the continuation of the close relationship between Guyana and The Bahamas  because, among other things, it provides the opportunity to discuss issues that affect us both, many of which have regional and global implications. Not withstanding that our world is increasingly interconnected, nothing can replace face to face exchange about issues that matter to both countries. Strong cooperation and sharing the knowledge of crucial areas for increasing prosperity and security for both our people and our close cooperation will enhance our relationship,” she said.

Dame Pindling said that she believes that this first State visit of any Head of State to The Bahamas in 16 years will have a lasting impact on regional cooperation.  “People to people links are important concepts for developing regional and bilateral relationships and we in the Bahamas are delighted that you and your distinguished ministers have come and I have no doubt that your visit brief as it is will result in strengthening the ties between our countries to the lasting benefit of both nations,” she said.

Bahamian Foreign Minister, Mr. Frederick Mitchell emphasised this point, noting that the visit “is an example of visible support and the people get to see who our neighbours and friends are and get to understand the countries in region with which we operate.” Speaking on the reaction of the Guyanese diaspora to the visit by their Head of State, Minister Mitchell said, “I was very moved last night at the Guyana dinner to see how your own citizens responded to your presence here in the Bahamas. They turned out in their numbers. They flew the flag. They sang the National Anthem and many of the students of the school this morning, I am sure they knew vaguely that their teachers were from Guyana and what that meant and your presence today help to put that special interest on their minds of the country from which they have teachers who arrived in the Bahamas.

President Granger said that the region is stronger as a unified block and if this strength is recognised the states of the region will be much faster and further along the road to development.  “Guyana and Bahamas are integral members of the Caribbean Community. The Bahamas is the northern most English speaking country in our community and Guyana is the southern most English speaking country. We, therefore, view this visit as an opportunity to strengthen our ties; ties which embrace the entire region. We are one Caribbean family. We are convinced that it is only by deepening regional cooperation that we can find solutions to our common challenges. We are small countries but we want to ensure that all of our citizens enjoy a good life,” he said.

The State Dinner was attended by Ministers of Government, State Officials, members of the business community and Guyanese living in The Bahamas. 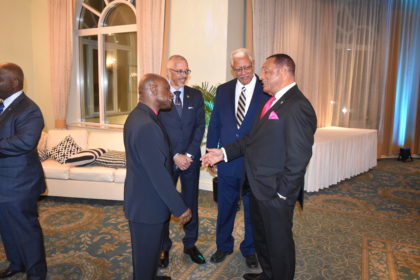 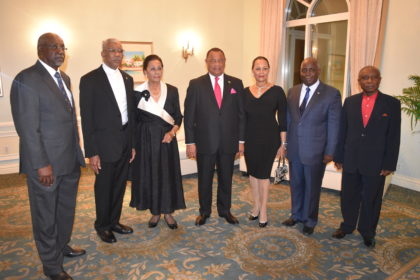 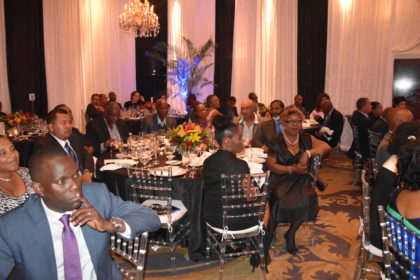 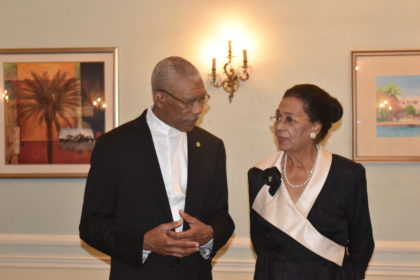 President David Granger and Governor-General of the The Bahamas, Dame Marguerite Pindling 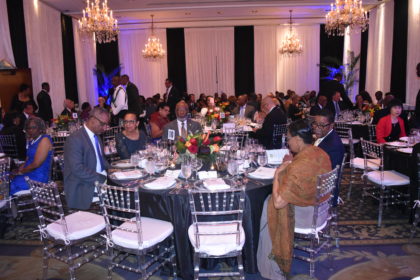 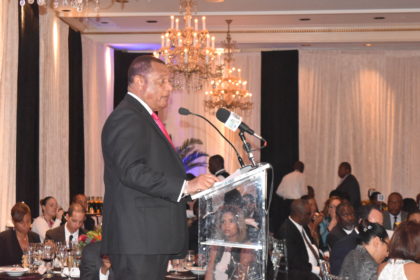 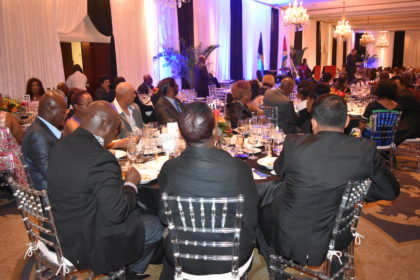 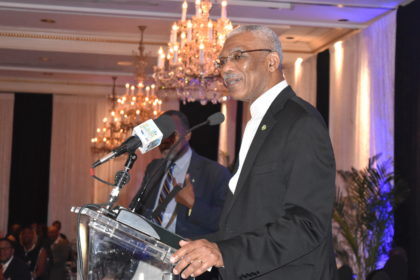 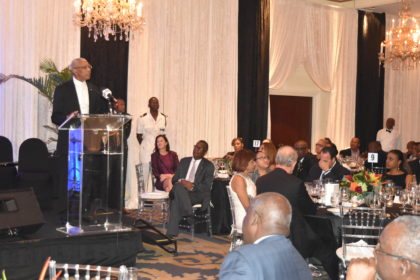