‘There has been a democratic renewal, change is coming’- President Granger

In 2016, the Local Government Election (LGE) became the vehicle through which the process of democratic renewal began. It has moved the country from despair to a democratic regime in which leaders can now sit, discuss, argue and decide how our communities will be governed.

This was according to President David Granger, who was speaking today at the commissioning of a Recreational Park at the Lyndon Johns Community Centre Compound, located at Victory Valley, Wismar, Linden, Region Ten. 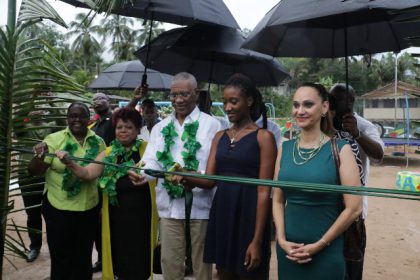 President David Granger and a student of Victory Valley during the symbolic cutting of the ribbon to commission the Recreational Facility. Also present are Minister of Social Protection, Amna Ally and Minister within the Ministry of Natural Resources, Simona Broomes and Annie Narine.

Hundreds of Lindeners gathered to witness the event since this was the first Head of State to visit the community.

Present at the commissioning was Minister of Social Protection, Amna Ally and Minister within the Ministry of Natural Resources, Simona Broomes. Regional Chairman, Renis Morian and Mayor Waneka Arrindell were also at the event.

The president noted that the establishment of a park in this Linden community symbolises the empowerment which has been restored in Victory Valley following the hosting of Local Government Elections on March 18, 2016, for the first time in two decades.

The president further added “When I got into office, there was something called ‘Ministry of Local Government’ and I said, I’m interested in communities; communities governing themselves and I changed the name from local government to communities so that Guyanese can understand that they have to live together and not be governed from the top.”

President Granger said the democratic process is being demonstrated in Victory Valley, by projects such as the Recreational Park which was made possible through a collaborative effort between Guyanese, Annie Narine and Dr. Hardatt Singh, who returned to their homeland to give back.

“I don’t want to see one play park, I want to see 1000 play parks. I see this play park as being a first step in opening more parks in Kwakawani, Ituni and other parts of the region,” the Head of State remarked. 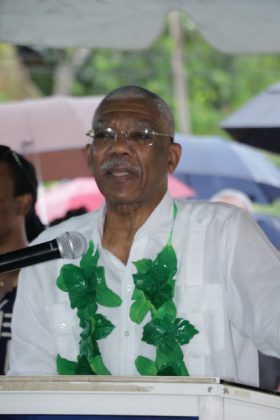 President David Granger during his address.

He noted that it is a special day for Victory Valley because pride has been restored to the community. “This is a happy day for me not because it’s the handing over, but it’s making me consider what else can be done for this region. This region has not explored the fraction of its potential …there is much more that can be done with the talent that you have.”

Speaking on the economic prospects of the region, President Granger noted that Region Ten is unique since it is the only region in Guyana that straddles the three main rivers of the country; Demerara, Berbice and Essequibo. It is also the pathway to Regions Seven, Eight and Nine.

“You have the opportunity to showcase your brilliance. Look at your culture… this is a display that the whole country should experience, the songs, the dances and even the talented athletes. I would like to see waterfronts developed so that young people could go strolling at nights safely with solar lights, good food, music hand in hand…and I would like to see this western shore develop a boulevard full of beautiful trees so that youths can enjoy the environment.

The president further encouraged “We now have the options of attracting friends to add that private contribution to the community participation …this is not only for people outside to come, this is for the people in the outside and inside to work together for the common good of our people.”

The approximately $3M project is the realisation of a promise made to the people of Victory Valley for the provision of a recreational facility for the children.

Minister Ally explained that the project is a testimony of the government’s commitment to its people. “This government is one that cares and listen to the concerns of all its people and seek by whatever means necessary to find solutions that will have positive outcomes.”

The park is located in the Lyndon Johns Community Centre Compound 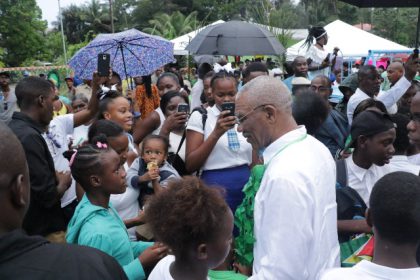 President David Granger interacting with some of the children of Victory Valley. 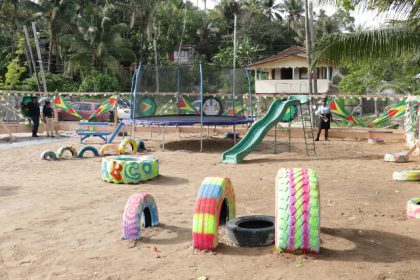