(Georgetown, Guyana, October 27, 2017) As government seeks to develop both our human and infrastructural capabilities, the National Data Management Authority (NDMA), under the Ministry of Public Telecommunications, is striving to fulfill its mandate by focusing on using Information and Communication Technologies (ICTs) to achieve these goals.

In terms of building capacity to ensure that the eGovernment Network is operated and managed effectively, 25 staff of the NDMA, Ministry of Finance, Ministry of Public Infrastructure and Ministry of Natural Resources underwent a series of extensive specialised technical training.  Over the past weeks representatives of Huawei Technologies Co., Ltd. trained participants in effective ways of operating and maintaining the eGovernment network infrastructure, specifically: installation and configuration, architecture, design, troubleshooting and other advanced topics related to enterprise, wireless and transmission networks. 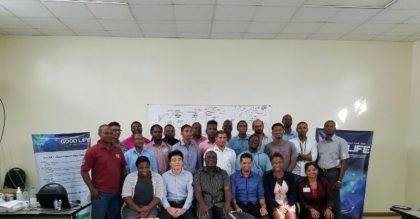 Chairman of the NDMA, Floyd Levi (seated at centre) sits with a Huawei official, other NDMA executives and participants of the training course.

The training sessions, which began on July 31 and ended on October 16, were held at the location intended for the NDMA’s Centre of Excellence in Information Technology (CEIT) – the University of Guyana, Turkeyen Campus.  The CEIT is a collaborative effort between the Government of Guyana and the Government of India and, once commissioned in 2018, will provide similar specialised information technology training for public servants.

At the closing ceremony on October 16, Chairman of the NDMA, Mr. Floyd Levi said that the training underscores government’s efforts to efficiently operate and maintain the eGovernment Network. He added that the initiative also forms part of a wider maintenance programme in which Huawei Technologies Co., Ltd. has been contracted under a US$1.3 million agreement with the Government of Guyana to provide operational support for the network and staff training.

But training alone is not enough.  Even as the NDMA continues to boost the capacity of public servants, by creating a workforce that is equipped to deal with the growing digital economy, its work also reaches into the depth of communities across Guyana to ensure that Government’s vision of making ICTs readily accessible to citizens is realised.  Initiatives that achieve this goal include the NDMA’s eGovernment ICT Hubs which are part of its Improving Digital Equity, Access and Learning (IDEAL) Programme. IDEAL seeks to bridge the digital divide by providing improved ICT access to poor, remote and hinterland communities. Since 2016, the NDMA has established 57 eGovernment ICT Hubs within Regions 2, 3, 4, 5 and 6, with more than 100 additional hubs planned as the network expands into the other parts of the country. Residents in communities such as Agricola, Sophia, Free and Easy, Stewartville, Smythfield, Masakenari and many others are now empowered by having access to information.

By the end of the year, an additional 20 Hubs will be launched in communities such as Lichfield and Calcutta in Region 5, Number 78 Village and Kilcoy Chesney in Region 6, Met-en-meerzorg in Region 3 and One Mile and Christianburg in Region 10. Given that education has also been identified as a national priority, the NDMA has also connected 95 Secondary Schools and 10 vocational and technical institutions across the country including the Hinterland communities of Aishalton, Paramakatoi, and St. Ignatius. And by next year, the NDMA will move to connect every primary school in the country to the eGovernment network as well.

As the NDMA continues to drive Guyana’s e-Government programme, its work foretells of a positive future for the ICT sector in Guyana particularly in this technological age. Government believes that Guyana can only advance in this world, where there is a high demand for technological goods and services, if the citizens of this country are adequately equipped with the required resources.