─appeals for patience as results are tabulated

The Carter Center has stated that the importance of transparency during GECOM’s tabulations and the announcement of elections results outweighs the desire for the processes to be expedited.

The international observer body noted this during a press conference on Wednesday. 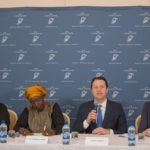 “We want to streamline the process, but I don’t think anybody has a concern so long as that transparency is maintained,” he added.

Former Prime Minister of Senegal and co-leader of the Carter Center observer mission, Dr. Aminata Touré, said there was always a wager between timeliness and the transparency of the process so that there can be trust in the system.

“I would always go for making sure that all the stakeholders agree with the result, even if it takes a bit of time,” Dr. Touré said.

The Carter Center commended the performance of the scrutineers attached to the political parties saying it was a demonstration of a transparent election. Polling staff contracted and trained by GECOM were also applauded for the execution of their work in a manner that upheld high standards of professionalism.

Concerning the declaration of results, the Carter Center held its position that GECOM was the only constitutional body responsible for issuing results and appealed to the nation to maintain peace and patience during the process.

Meanwhile, preliminary results of the Regional Elections were declared by the Returning Officers of Regions 1, 2, 3, 5, 8, 9, 10  as of mid-Wednesday.