The historic Umana Yana, which was rebuilt at an estimated cost of $106M, was on Thursday officially handed over to the Ministry of Education, Department of Culture, Youth and Sport by the Minister of Public Infrastructure, David Patterson.

Minister within the Ministry of Education Nicolette Henry in an interview with the Government Information Agency (GINA) noted that the Umana Yana is one of the premier buildings in Guyana. The original building which was destroyed by fired on September 9, 2014 was one of the primary Amerindian heritage sites in the country. For this reason, Minister Henry stated that “it is important to have this building rebuilt so that that bit of history and heritage can be intact.” 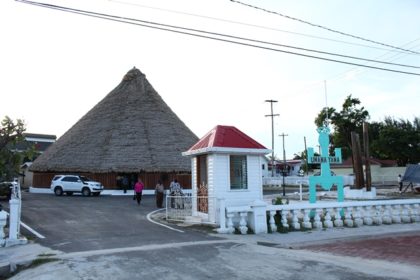 Minister of Indigenous Peoples Affairs’, Sydney Allicock said that the rebuilding of the structure is a clear indication of government’s support for the development of the indigenous people. “This building is to signal that recognition and the presence that we are a people, a part of this great nation of ours,” the Minister stated.

Minister Allicock added that the building also lends the opportunity for Guyanese to appreciate the first people of Guyana. The Minister pointed out that “we could be able to share that education between the coastal belt and the hinterland; it will allow better recognition and appreciation for the people in the hinterland.”

Additionally, the presence of the 55-foot high structure can  contribute to social cohesion within the Guyanese society. “It also will give us the opportunity to begin or continue that blending that we are looking for, the bringing together of the peoples of Guyana, so I see this as a continued strengthening of nationhood,” Minister Allicock explained. 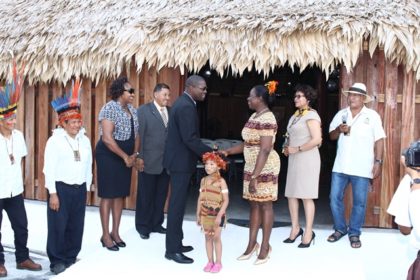 Minister Patterson expressed his satisfaction to see part of Guyana’s history standing again. However, the Minister pointed out that his Ministry was keen on ensuring that there were fire alarms and firefighting equipment installed. Additionally, fire preventative measures were put in place as part of the safety measures placed in the building.

“If you look up you will notice we have fire alarms and firefighting equipment, hopefully we will never have to use it, but … all the preventative areas are there,” Minister Patterson pointed out .

The Minister also disclosed that solar systems will be installed next week which will provide electricity for the building. 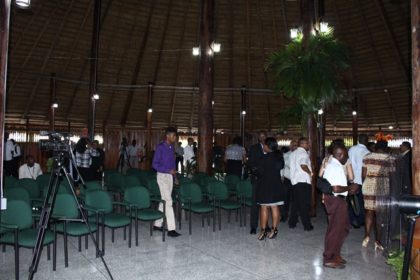 An interior view of the Umana Yana

The structure was rebuilt from thatched allibanna, manicole palm leaves, and wallaba posts latched together with mukru, turu and nibbi vines.

The Umana Yana was erected in August 1972 for the Non-Aligned Foreign Ministers Conference in Georgetown, Guyana, as a VIP Lounge and recreation centre. The landmark structure served as the venue for a number of historical and cultural events for over four decades.